Handguns and I Call Fives to Split Headline Slot on Remaining Dates
Rounding Out the Bill on All Dates: The American Scene and Forever Came Calling
Plus Daybreaker (3/9-3/18) 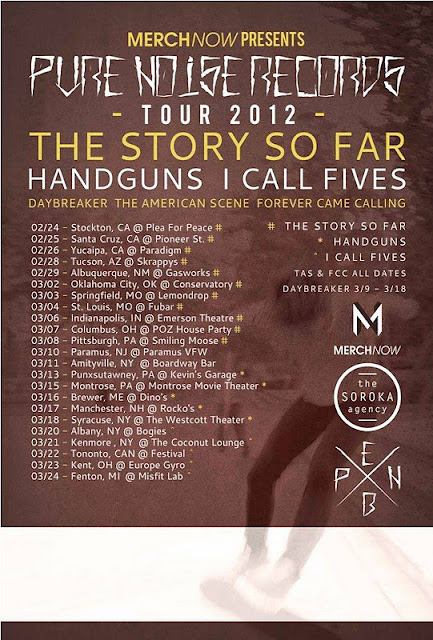 Rising Bay Area punk/indie label Pure Noise Records is coming off its biggest year yet, so to satisfy fan demand and keep the momentum going, the label has announced plans for its first-ever Pure Noise Records Tour, featuring several of the bands that have helped the label make its mark on the scene.
Headlining the first two weeks of the tour (2/24-3/8) is critically acclaimed Bay Area punk outfit, The Story So Far who are on track to becoming a key force in the pop punk scene. Harrisburg, PA’s Handguns will then headline one week (3/13-3/18), after which NJ’s I Call Fives will take over the headline slot for the remaining dates (3/20-3/24.)
Rounding out the bill on all dates are Berkeley, CA’s The American Scene and Southern California’s Forever Came Calling. Boston, MA’s Daybreaker will jump on the tour from 3/9-3/18.

Pure Noise Records was started in 2009 out of Berkeley, CA by founder Jake Round. The label’s roster also includes such acts as Troubled Coast and Create Avoid. As Round explains in the latest issue of the UK magazine Rock Sound, “Pure Noise is a small, hardworking company that seeks to release music for artists that we truly believe in.”