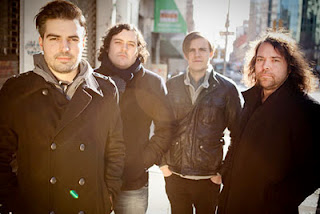 London’s The Boxer Rebellion are pleased to announce their upcoming Spring North American headline tour. Beginning on Friday, April 6, in Tucson, AZ, at Club Congress, the tour will take in nights at notable venues across the U.S. and Canada such as The Parish in Austin, TX, on Tuesday, April 10, Music Hall of Williamsburg in Brooklyn, NY, on Friday, April 27, The Great American Music Hall in San Francisco, CA, on Tuesday, May 15, and El Rey Theatre in Los Angeles, CA, on Friday, May 18. After the tour’s completion, the band will also be making a very special appearance in Mexico City, Mexico, on Saturday, May 19. General tickets for the upcoming tour are now on sale through the band’s official Web site HERE.

Additionally, the band recently released a live recording titled Live In Tennessee digitally. Available now for purchase through iTunes and the band’s official Web store, the album features an entire 16-track set performed by the band in frontman Nathan Nicholson’s hometown of Maryville, TN. Recorded and mixed by Ben MacAmis at the Clayton Center for Performing Arts on October 12, 2010, Live In Tennessee also features four different album covers, a digital booklet, and is available in full high-definition WAV and MP3 digital formats.

Released on February 1, 2011, and created in conjunction with Ethan Johns (Kings of Leon, Ryan Adams, Ray LaMontagne), The Cold Still, the band’s third full-length LP and an album regarded by Billboard Magazine as an “epic, effortless offering from a quartet dead set on perfecting their pop-rock craft,” is an exercise in master class performances and sophisticated songwriting from a band that embodies the very definition of “independent.” Monumental and intimate in equal measure, it is a breathtaking album bristling with tense passion and heartrending lyrics, all with an effortless grace that has become The Boxer Rebellion’s trademark.

The Boxer Rebellion will be making the following appearances across the U.S., Canada and Mexico throughout April and May. Tour dates below.