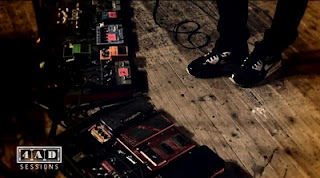 Coinciding with today’s release of The Big Pink’s second album, Future This, the eleventh instalment of the 4AD Sessions has just been posted online. For more details on the album, please go here. You can listen to a stream of it here.
Directed by long-term 4AD collaborators Iain and Jane, Robbie Furze and Milo Cordell are joined by live band members, Victoria Smith and Zan Lyons to help bring to life the immersive feel of the band’s music. Recorded at the 3 Mills film complex on Three Mill Island in Bromley-by-Bow, London, the stark backdrop of the warehouse space has flourishes of colour added by lasers while the band showcase four tracks from new album, Future This, plus a beautiful acoustic version of ‘Velvet’ (taken from their debut A Brief History In Love) added to complete the set.
You can watch the full session here – http://4ad.com/sessions/011
The Big Pink 4AD Session (VSAD011)
1. Stay Gold
2. Hit The Ground (Superman)
3. Velvet
4. Rubbernecking
5. Give It Up
In addition, the single ‘Hit The Ground (Superman)’ – currently A Listed at Radio 1, 6Music and XFM – is coming out on 12″ backed with a remix from Forest Swords. You can hear that mix here. There is also a remix of this track doing the rounds from King Krule, which you can hear here.
Next month will see the band go out on a nationwide tour, culminating in an NME Awards headline show at The Garage in London. Dates below…
February
8th – Bristol Thekla
9th – Portsmouth Wedgewood Rooms
11th – Nottingham Rescue Rooms
12th – Liverpool Academy
14th – Glasgow King Tuts
15th – Manchester Academy 3
16th – Birmingham HMV Library
18th – Brighton Digital
20th – London The Garage (NME Awards Show)
‘Stay Gold (4AD Session)
Full 4AD Session
Forest Swords remix of ‘Hit The Ground (Superman)’
Get More:
www.4ad.com

The Diamond Age Unveil New Single ‘I Might Just Be’‏