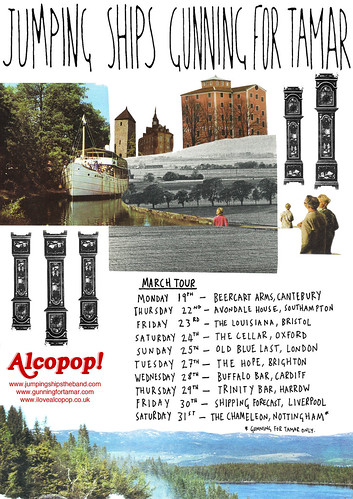 Fresh from a storming 2011 packed with UK dates and festivals – and hot on the heels of critically acclaimed sold out EP ‘Standard Bearer’ and stand out single ‘Heart and Hope’, alt-rock 4 piece Jumping Ships are back to join Alcopop! new boys Gunning for Tamar in an epic March tour, taking in their biggest UK tour to date.

And while Gunning for Tamar have been touted as one of the bands set to slay 2012 by Rocksound who brandished there new track ‘a phenomenal statement of intent from a very promising band’. Jumping Ships were featured across the board at the tail end of last year, Katie at Kerrang calling them ‘An addictive blend of danceable, jangly rock songs topped with British punk attitude’, whilst Rocksound suggested ‘Standard Bearer is a launching platform for these guys to do some serious commercial damage.’

With both bands armed with huge riffs, soaring melodic vocal hooks and the kind of live shows that will create a whole host of those ‘I was there’ moments – this is genuinely a tour not to be missed!.

Courtesy of Alcopop! you can also listen to and download Jumping Ships single ‘Talisman’ for free streaming below-