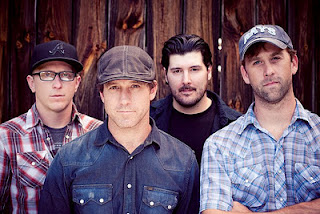 Rock Sound is hugely excited to announce that trailblazing punk godfathers HOT WATER MUSIC will play a tiny show at the Old Blue Last in London on 2nd May.
Hand-picked support comes from Sharks and Hildamay. Tickets go onsale Monday 30 January at 11am.
This will be the Gainesville pioneers’ only UK show before the release of their as-yet untitled eighth album, due out in summer on Rise Records.
“The UK was one of the first places outside of the US to support us, and it has continued to be one of our favorite spots on tour,” says Hot Water Music bassist Jason Black. “It’s an honor to be recognised not only so far from home, but in a place where so many bands that influenced us have been from. With that said, we’re very excited to celebrate the upcoming release of our new record with what is sure to be a mental gig at The Old Blue Last. See you there!”
“Does Hildamay like Hot Water Music?” asked Hildamay singer Tim Lawrence. “Does a bear shit in the woods?! Listen – they are one of the major inspirations for our band. We totally appreciate Rock Sound giving us a show with our peers.”
Tickets are £15 in advance from www.musicglue.net/rocksound from Monday January 30 at 11am, and entry is strictly 18+.
There is a strong possibility Circuit Sweet will cover this show!