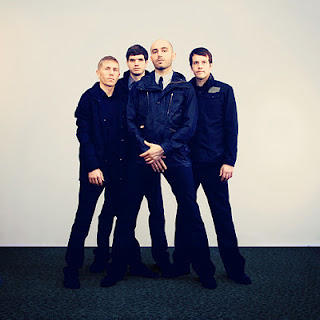 It’s not often that a project of any variety comes out of the gate with a clear brand, vision, purpose and identity. But Hidden Hospitals, a four-piece alternative rock band from Chicago, IL, has accomplished just that. Most bands spend years and many album cycles sifting through ideas to define a sound. Hidden Hospitals’ singular focus has been forged from many collective years within the music industry in previous projects, including Damiera [Equal Vision Records] and Kiss Kiss [Eyeball Records].

“Places revealed to those seeking resuscitation, rejuvenation, decompression, atonement.” Their website defines where this band derives its moniker. Their iconic mark embodies this foundational vision. Obscured within a double “H” is the universal symbol for aid.

Consider their first release, EP 001, to be a prototype. Written between Chicago, New York, and Nashville, singer David Raymond has taken this collection of songs and carefully crafted the sonic base for this band. “Addition by subtraction” is how producer J. Hall describes the orchestration within EP 001. “Whenever a new sound is introduced, another must be scaled back to accommodate.” The result is an album rooted in the foundation of soulful rhythm and melody, orchestrated in a disciplined fusion of cohesive sound. Combining orchestral movements with razor sharp edges, while paying their respects to bands such as Jawbox, Thrice, and more, it’s a taut and potent sound that spans – from pop to electronica to progressive – the breadth of modern rock. Think a more buoyant Minus The Bear, or a more syncopated Mutemath, both informed by the better parts of turn-of-the-21st Century indie rock.

This relationship made EP 001 possible, with no need for outside funding or labels. Hidden Hospitals has chosen to forgo the traditional roads mapped by an industry in transition. They intend to forge new paths, leaving a trail that inspires others to follow. If EP 001 is any indication of this group’s future, consider it a bright one.

To listen on Spotify: http://open.spotify.com/album/2Qz3lty0sLGdEZhUyEteVZ