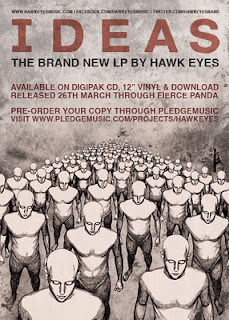 Hawk Eyes Announce new album ‘Ideas’ – set for release March 26th, 2012
Hear new track ‘Headstrung’ streaming below-
Hawk Eyes – “Headstrung” by Fierce Panda Records
HAWK EYES are from Leeds, Englandshire. They consist of Paul Astick (vocals / guitar), Rob Stephens (guitar), Ryan Clark (bass) and Matt Reid (drums), and have done so in some form or another since 2005. Well, since drummer Matt joined from Whores Whores Whores anyway.
One of those previous so-called ‘forms’ was Chickenhawk, whose gruesomely complex ‘Modern Bodies’ album of 2010 cheerily brutalised a not-so-innocent generation of grumpy grunged-up kids as they toured the known universe with Alexisonfire, We Are The Ocean and The Computers. Unfortunately all this cheery brutalisation came at a cost – a good doctor told singer Paul that his traumatic vocal stylings were doing unspeakable damage to his throat. He had to calm it down or get the heck off the back of the rock bus. So he calmed down. Relatively speaking.
The end of 2011 saw the renamed and reconstructed HAWK EYES foursome setting out their stall for future ever-so-slightly-mellower chaos with a nomination for Best Hard Rock Act at the Artrocker awards, touring fun with Turbowolf, The James Cleaver Quartet and Ginger Wildheart (though not all at the same time, you understand) and the release of the five-track ‘Mindhammers’ EP on Brew Records, a manically precise fusion of ferocious melodies and vivacious riffs which spewed forth comparisons with Foo Fighters, QOTSA, Alice In Chains and the epically heavy monstersound of Faith No More.
All extremely true, and all very indicative of a band growing up and rolling with the melodic punches. And the ‘Mindhammers’ template is refined and rewired on ‘Ideas’, HAWK EYES’ debut album which is sleek and modern and hardcore and suitably post-post-everything, but also cosmic and mischievous and never averse to (ab)using a classic riff here or there, as you may well expect from a band who blithely speak of their own album thusly: “The process of recording was intense and at times it felt like we wouldn’t come through it in one piece. It’s a collection of stories about:
Disappointment
Adversity
Suspicion
Pride
False idols
Broken promises
And Partying.
It’s not a negative album, it’s pragmatic. Basically, we’re all going down together, and we love to party!”
There’s some really quite nasty growling going on in this album as well. Just don’t tell the doctor…
Tracklisting:
1. Witch Hunt
2. Skyspinners
3. Yes Have Some
4. Headstrung
5. You Deserve A Medal
6. Hollywood Sweatshop
7. The Meeting
8. Milk Hog
9. Kiss This
10. Bears By The Head
11. Bees
Forthcoming Live Dates:
20th March Buffalo Bar, London Highbury Album Release Show
TBC March Leeds Album Release Show
Get More:
• Official Site
• Facebook
• Twitter