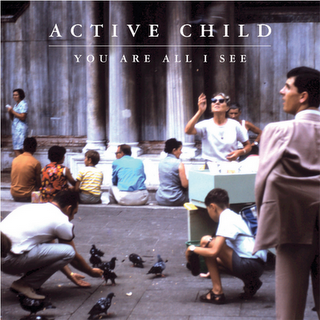 Active Child, the musical project of choirboy-turned-indie-pop musician Pat Grossi, is proud to release the newest music video for his song “Hanging On.” The song is a spacey, ethereal beauty featuring Grossi’s gorgeous vocals and an undeniable r&b bounce, while the music video keeps its focus on the shimmering beauty of the natural world, creating a powerful juxtaposition that sneaks up on you.

“Hanging On” is the second single from You Are All I See, Active Child’s debut record released in August 2011 through Vagrant Records, and rereleased with a Deluxe Edition in November. You Are All I See has earned glowing praise from critics. All Music Guide gave the album 4.5 stars, noting “2011 is a year for strong albums in general, and You Are All I See deserves to be ranked among the best.” The Boston Phoenix said it “…has dozens of moments that are nothing short of breathtaking.” Pitchfork Media noted “Active Child’s sound now seems positively ahead of its time.” Following one of Active Child’s sets in his hometown of Los Angeles, the Los Angeles Times said it “heralded one of the most original and ambitious sounds in Los Angeles this year,” and LA Weekly said “It was unlike anything else being played around Los Angeles and makes Active Child one of the most interesting bands to watch this year.” The album and its songs were included numerous year-end best-of lists, including Buzzbands, Filter Magazine, Huffington Post, Relevant Magazine, and OneThirtyBPM.

Active Child are also continuing on a huge world tour which began last year with dates in Australia and Europe, following the band’s successful run of dates opening for electronic artist M83 and their headlining tour before that. The band will be announcing headlining dates with Balam Acab soon. For a full list of tour dates, please see below.