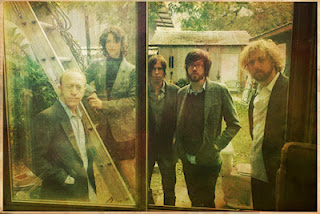 At the end of the year in 2007, Okkervil River released ‘Golden Opportunities Mixtape’, a free EP intended as a gift to fans. Called a ‘Must Have Download’ by Rolling Stone, the songs were recorded on the road throughout Europe and America during extensive touring for their album ‘The Stage Names’. This year, the band continues that tradition in the sequel release ‘Golden Opportunities 2’, which both hearkens back to the original release and varies the formula.

‘Golden Opportunities 2’, comprising of 5 cover versions, is available to download from the Okkervil River website, in both MP3 and lossless formats.

Like its predecessor, ‘Golden Opportunities 2’ is a series of conceptually-related covers, this time by lesser-known musicians’ musicians such as Motown session player Ted Lucas, the 1980’s Australian band The Triffids, and the mysterious L.A. singer-songwriter Jim Sullivan, who vanished in the New Mexico desert in 1975. In contrast to the intricate arrangements and detailed production of this year’s full-length Okkervil release ‘I Am Very Far’, which Pitchfork called “a lyrically and musically feisty album” and about which Filter said “…rich, layered arrangements make ‘I Am Very Far’ both fascinating and memorable,” ‘Golden Opportunities’ was recorded entirely live to two-track tape in one day at the Austin studio Premium Recording. The resulting EP showcases a band that has developed both a tight responsiveness and a loose-limbed casualness after a year spent on the road. A hazy mystery hangs over these songs, which are evocative on their own but, when collected together, add up to something greater and stranger than the sum of their parts.

‘I Am Very Far’ is available now via Jagjaguwar.