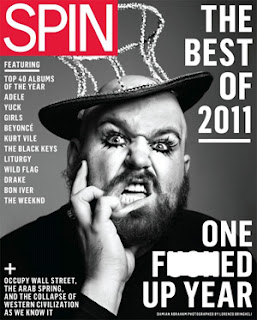 Spin magazine have named David Comes To Life their album of the year, where frontman Damian ‘Pink Eyes’ Abraham also features on the cover. The album also features heavily in end of year polls with nods from NPR, MTV (#4, USA), Onion AV Club (#2), Stereogum (#4), Loud & Quiet (#14), Rock Sound (#22), Drowned In Sound (#26) and The Quietus (#34) and many more.
F**ked Up – ‘Turn The Season’ video
Taken from the album David Comes To Life
The latest video from the hugely acclaimed David Comes To Life album comes from ‘Turn The Season’, shot during the photo-shoot for the album and features familiar faces from the ‘Queen Of Hearts’ and ‘The Other Shoe’ videos as well as the characters from the 7″ series of companion singles around the room.
Watch ‘Turn The Season’ here:
Year Of The Tiger – 12″ single out February 20th

Since 2006, F**ked Up have been releasing an annual 12” single on each Chinese New Year. Named after the beasts of the Chinese Zodiac, the sprawling 10-15 minute-long epics have been among the band’s most acclaimed material and were the first releases to expose them to non-punk audiences.

Year Of The Tiger is an anthemic progressive rock masterpiece featuring guests Jim Jarmusch, Annie-Claude Deschênes and Austra. It was produced by Shane Stoneback (Vampire Weekend, Sleigh Bells) during the sessions for last year’s critically acclaimed rock opera David Comes To Life. The 15-minute long A-side features the band’s familiar layers of guitar and roaring vocals, taken to a new level with the addition of piano, Jarmusch’s dark recitations and Deschênes’s gorgeous crescendos, in this menacing but uplifting story about the predation of predators whereas B-side “ONNO” is a 22-minute long palindromic drone.

A portion from the sale of each record will be donated to the Save The Tiger fund.