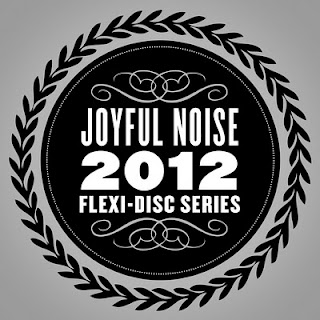 WTF is a Flexi Disc?
In case you are unfamiliar, a Flexi Disc is essentially a thin, single-sided vinyl record which is flexible (hence the name), and rather obscure. However it is playable on any standard turntable. Back in the day flexis were often packaged inside magazines and even in cereal boxes.

The Joyful Noise 2012 Flexi Disc Series will feature a different artist each month for the duration of the year. All of the releases will be strictly limited to 500 copies on single-sided clear flexi discs. Digital will NOT be made available. That’s right, these songs will only be available on these 500 physical units. All of the songs featured in the series are 100% new and unreleased and will never be released in any other format.

Subscription to the series costs $4 / month, with an additional “Deluxe” box set package available as well.