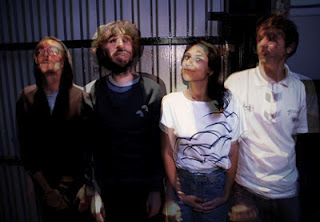 Islet have announced their debut album, to be released on Shape (Turnstile). Illuminated People follows 2010’s rapturously received pair of EPs – ‘Celebrate This Place’ and ‘Wimmy’ – which the NME described as being “a sonic boom in the face to anyone who might have thought they had something to hide”. A group who work under a strict autonomy, this is – as a result – their most cohesive sounding work to date.

It’s an album forged out of the Cardiff-based collective’s strong ties to a DIY sense of thinking and more outré passions in the arts. The subsequent ten tracks stand as a bold opening statement from a band that have quickly proven themselves masters of finding the common thread between at-first seemingly disparate influences.

That they’ve had the confidence to do this lies on an early decision to take control of their entire aesthetic – releasing on Shape Records, an entirely independent label run by the group’s Mark Thomas. Islet have always sought to maintain direct contact with people in a less oppressive manner than the constant internet bombardment others pursue. Self-made zines, with artwork and layout all done in house provide the group’s main mouthpiece, a device that harks back to the 80s golden age of DIY. But one which has become relevant again as music lovers seek to find more personalised and unique ways to connect with their favourite acts. Crucially, the zines are available only on request, the thought being that if you like their music enough you will come to them.

This doesn’t mean the group are closed to outside influences. Illuminated People marks a first in that they’ve allowed someone other than themselves to take the reins on recording, with producer Drew Morgan stepping in to bring together what amounts to a montage of sprawling, searching sound.

On this record the group’s third-eye opening mix of Gang Gang Dance-leaning rhythms and Kraut-reaching instrumental breakdowns can breathe, something that’s illustrated perfectly in the hugely ambitious nine minute opener ‘Libra Man’. There’s the still a clear sense of free abandon, of group members swapping instruments and songs forming from the nucleus of jams, half-ideas and fleeting thoughts re-visited and built on to take on entirely new meaning and structure. ‘Entwined Pines,’ for instance starts out with ghostly choirs and wisp-on-the-wind vocals, skipping through noise rock and ending up ferocious post-punk though – and this is the key part – without feeling overly forced or tacked on.

Live they already have a burgeoning reputation. Spending the summer of 2011 playing festivals including Primavera, Leeds & Reading and Bestival, they beguiled onlookers with ritualistic chants, sometimes delivered away from the song being played on stage; at other times they were seen meandering off into the crowd. In person as in music, they seek to break down walls.

At their November shows, you were able to buy the limited 12” ‘This Fortune’ which features as its B-side ‘Sound Collage #1’, a 15 minute aural collection of phone recordings, found sounds and clips of songs previously not heard beyond the rehearsal room. You get that same sense of freeform on Illuminated People, the sense of a group uninhibited by conventions, seeing the recording process in the way they see live performances; as a chance for expanse and experimentation.
Indeed, Islet’s vision appears to be that of limitless possibilities, not in the sense of the po-faced pedal hoarder, but in the simple joy of exploration. That’s what Illuminated People is; an album that drips with pride and the refusal to stand still, and ultimately one that fizzes with a sense of sheer enjoyment that came through making it. Islet are a group of people completely in charge of their own destiny, through their music you can tell that’s an extremely liberating thought.