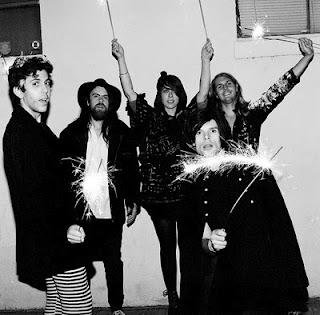 Canvasback Music/Atlantic Records artists Grouplove have announced details of a UK headline tour for February 2012, which will be followed by a string of European shows. The band will also release “Colours” on 20 February 2012, the next single to be taken from their critically acclaimed debut album, Never Trust A Happy Song.

The nine-date tour will commence on 16 February at Brighton’s Haunt taking in York, Sheffield, Manchester, Glasgow, Liverpool, Middlesborough, Birmingham and concluding with London on 28 February at the Garage. Last time the band played London they brought the house down at XOYO.

Since the release of their debut album Never Trust A Happy Song, Grouplove have had consistent radio support from the likes of Radio 1’s Zane Lowe, Nick Grimshaw and Fearne Cotton. The LA based quintet have also performed a BBC Introducing Session for Huw Stephens as well as being a firm favourite with BBC 6music’s Lauren Laverne. The band have also received heavy rotation on their five singles which have been playlisted at 6music and XFM.

On the other side of the pond, Grouplove recently performed on the influential David Letterman television show in the US. See the performance here –

In addition, one of the band’s previous singles, “Tongue Tied,” will be featured in the new global Apple iPod Touch TV ad which airs in the UK from 7th December.