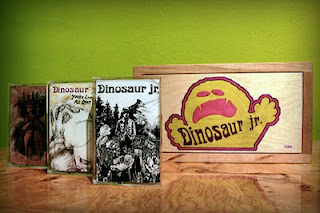 Dinosaur Jr. have announced the reissue of their first three albums on cassette via Joyful Noise Recordings. Sold as a 3-album custom wooden box set – limited to just 500 copies – the Cassette Trilogy includes each album from the classic Dinosaur Jr. canon: 1985’s Dinosaur, 1987’s You’re Living All Over Me, and 1988’s Bug.

Originally released on cassette and vinyl via the legendary Homestead and SST labels, the three albums were reissued on vinyl last month via Jagjaguwar. Now, in conjunction with Dinosaur Jr.’s upcoming West Coast tour, Joyful Noise is reissuing all three albums on the more archaic (but equally tactile) of the original formats. On the heals of the instantly-sold-out Bug cassette reissue earlier this year, this is the first time Dinosaur and You’re Living All Over Me have been available on cassette since their original 1980s releases.

Limited to a one-time release of 500 hand-numbered copies, the Dinosaur Jr. Cassette Trilogy is packaged in a custom-built, screen-printed wooden box , featuring the classic Dinosaur Jr. “monster” artwork. The individual cassettes are manufactured on high-quality chrome tape with purple, black, and white shells. Each are individually wrapped with 8 panel original artwork.

[Note: only 350 copies of the box set are available for purchase online. The remaining 150 copies will only be sold on the upcoming West Coast tour (dates below). Orders will be shipped on December 9. Individual cassettes will not be sold apart from this collection.]

(Dinosaur Jr. performing Bug in its entirety at each show, with Henry Rollins interviewing the band live)