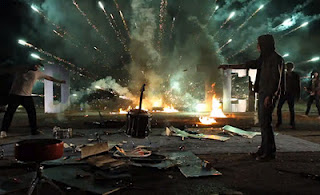 “‘Main Street,’ the first single from Deer Tick’s new album, Divine Providence, finds the Rhode Island rockers hitting a comfortable sweet spot where the romantic rhythms of girl-group pop, the raspy punk of Nirvana and the rootsy, blue-collar poetry of Bruce Springsteen all blend together into something fresh and new.” – Rolling Stone
“The growly, funny, slyly insightful John McCauley and his band Deer Tick get rowdy – well, rowdier – on their album Divine Providence (Partisan) which cranks up the amps to push their rootsy, twangy rock toward boozier dives.” – New York Times

“Their new album is everything we like about rock and roll. It’s up-tempo, irreverent, silly when it needs to be, grave when it must be.” – American Songwriter

On the heels of completing their US tour in support of their fourth album, Providence, RI-based Deer Tick shares the “Main Street” music video, the first music video from Divine Providence. Having premiered the censored version of the video with MTV last Friday, the band now debuts the unedited, urine-filled, NSFW version. Watch as the band rocks through “Main Street” while avoiding exploding fireworks, flying pieces of shattered instruments, and a burning music video set, directed by Colin Devin Moore (@colindevinmoore).