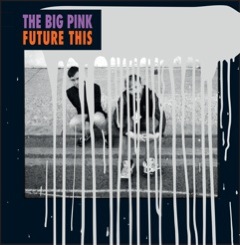 Future This, the second album from The Big Pink, is being released on 4AD on January 16th 2012.

Named after a skateboard company’s slogan from the 80s, it’s an apt title. The genesis for this record stems from the band deciding to not rush in, instead utilising their time to toy with some new studio equipment acquired to help them experiment more, and it was with the excitement that came with making beats so successfully that the impetus they needed to get started on album two came. Over the summer of 2011, with ideas flowing, they worked with producer Paul Epworth (Adele, Florence & The Machine, Friendly Fires) to help them match their high ambitions. The end result does exactly that, adding more shades to The Big Pink palette, rewarding both them and listener for their patience. Future This commands attention throughout with its genius gently sinking in like all good records should.

Prior to the release of Future This comes the infectious ‘Hit The Ground (Superman)’, a track that bares all the hallmarks of a future Big Pink classic. Like ‘Stay Gold’ before it, ‘Hit The Ground (Superman)’ was given its premiere by Zane Lowe on his Radio 1 show in the coveted Hottest Record In The World slot last night. The track will be released on a 12” and as a download, both accompanied by remixes (details of which are to follow shortly).

The Big Pink play a handful of dates this year including a show in Tokyo and a low key one at London’s Shacklewell Arms in December. They will head out on their first tour proper across the UK in February, culminating in a headline show at The Garage in London as part of the NME Awards Shows that month. All dates are below…