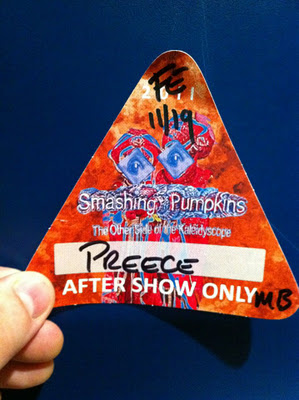 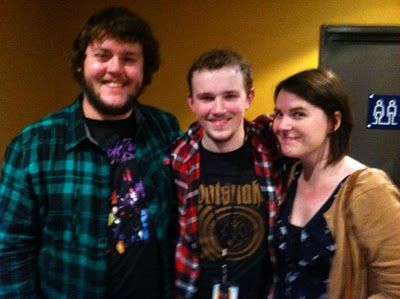 Circuit Sweet had the complete pleasure of attending Smashing Pumpkins’ final UK date at Birmingham’s 02 Academy Saturday 19th November, thanks to Smashing Pumpkins’ Drummer Mike Byrne, pictured above.
Mike is a regularly featured musician here at Circuit Sweet due to his involvements with loved band Bearcubbin’.
The Smashing Pumpkins–Singer/Guitarist Billy Corgan, Guitarist Jeff Schroeder, Drummer Mike Byrne And Bassist Nicole Fiorentino have just finished their 7 date UK tour throughout  November; which saw the band take to Manchester, Glasgow, Newcastle, 2 dates at London’s Brixton Academy, Sheffield and finally Birmingham.
Smashing Pumpkins performed to a sold out venue, with an inspiring set balanced with new material during their engaging 2 hour set and warp speed encore. Mike, a true talent behind the kit, maintained the solid energy and proved his abilities captivating the crowd. All four regularly stated their final show in Birmingham had by far the best reception, the best crowd.
This year, EMI Music will honour the legacy of THE SMASHING PUMPKINS with an extensive campaign that will see the iconic band’s albums from 1991-2000 reissued in fully remastered deluxe versions, each with bonus material.