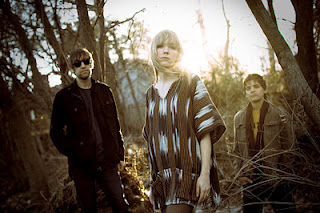 Last month we streamed you another impressive compilation bought to you from Exploding in Sound.

Brand new compilation from Exploding In Sound featuring twenty two tracks of ear tantalizing enjoyment. In the interest of keeping our introduction short, we can safely say that the bar continues to be raised, and if anything in this crazy world is certain, great music shall prevail. I strongly suggest you listen to the compilation in the sequence as if it were an album. We put a great deal of thought into the transitions for your maximum enjoyment. Until My Head Explodes: The Saga Continues covers a diverse range of rock music, at times beautiful, sexy, and a bit ominous to dirty, violent, and generally stomach turning, and everything in between. Featuring a blistering combination of legendary artists and the up-and-coming bands you genuinely need to know… sit back, relax, and immerse yourself in the music.
Rediscover that album stream here.
One of the stand out tracks that was featured on the compilation had to be the second single in; Ume- Captive.
Yesterday Ume revealed their new video for cyclonic lead single “Captive” which was exclusively premiering on mtvU .. All day, the video, featuring the Austin-based trio performing in a burning house, had been playing every hour throughout the day. It’s also exclusively showing on mtvU.com.
For those that were unable to access the viewing; their new video can be seen streaming below.
Directed by Matt Bizer, the video for the soaring, anthemic track was filmed at an old abandoned house outside of the band’s hometown Austin. Shot over two nights, the clip succinctly captures Ume’s unbridled energy and showcases dynamic frontwoman Lauren Larson’s feverish guitar playing as ash swirls around her and bandmates Eric Larson (bass) and Rachel Fuhrer (drums) and fire envelops the house. “Captive” is the band’s first single from their acclaimed sophomore LP, Phantoms (Modern Outsider).

Released in August, Phantoms marks a mature development for the band as they have refined their sound and tempered their revved up rock with undeniable melodies and potent pop hooks without sacrificing any of the sonic catharsis displayed at their live shows. “This band is ready to break out in a whole new way…A little like fuzzy shoegaze, raw garage rock and irresistible pop all rolled into one fiery package,” declared Nylon while Relix exclaimed: “The group, led by powerhouse singer/guitarist Lauren Larson, has merged the sounds of heavy rock and ethereal indie pop with deft precision, finding new ground somewhere in between Warpaint, Metric and Mogwai.”

Ume’s music is proving to resonate on a national level. Phantoms continues to gain steam at radio and is receiving airplay across the country including on Sirius and influential stations KEXP and KROQ’s Jonesy’s Jukebox. Meanwhile, their track, “Run Wild,” also from Phantoms, was just featured in the hit CW series “The Vampire Diaries” resulting in their music reaching a whole new audience. The Austin American Statesmen featured Ume on their cover this summer and described them as having the elusive “It” factor and “setting themselves far apart from their peers.”

Some of the band’s characteristic combustible energy was bottled up for the band’s Daytrotter session which was recently released and available for free download at Daytrotter.com. Dubbed the “Sling Sessions,” the session recorded in February marked the band’s first official performance (outside of practice) with new drummer Rachel Fuhrer in addition to Lauren’s arm being in a sling as a result of a bad fall on ice while leaving ZZ Top guitar slinger Billy Gibbon’s tequila tasting party. The four-song session captures an exciting moment for the band as they unite on tape for the first time.

Having just wrapped up a tour as main support for Middle Class Rut in addition to several festival shows, Ume are plotting their next leg of what’s sure to be another round of sweat-inducing, ferocious performances. As Brooklyn Vegan points out: “Bandleader, guitar virtuosa, and straight up bombshell Lauren Larson runs around stage like a firecracker ready to explode at any given moment, pouring all of what she is into the performance.”