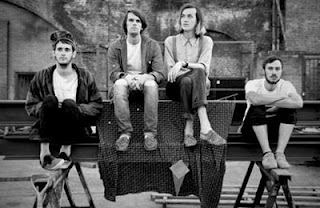 Kingston-based band, Tubelord is back again, this time with the anticipated release of their second full-length record, R O M A N C E. Set to drop on October 10th via Pink Mist, the cd will be available on CD 12” vinyl LP and also as a digital download.
Having within the year expanded to a quartet, experience an extensive European tour/play a number of summer festivals, with the release of the new album, this fall Tubelord will take on both a renewed sound and a new approach to lyrical content and the concept of meaning. Unlike most bands, whom typically write on personal experiences and emotions, Joseph Prendergast (lead singer) wished to relate tales outside of himself by using words found in poetry of women: removing himself away from his own life completely, therefore creating an atmosphere of absence in which meanings of words are extracted. The ending product resulting in an accurately usage of borrowed and recycled words, and a journey full of substituted experiments of both context and meaning.
Check out the video release of “My First Castle”
Tubelord ≈ My First Castle from Sean Roy Parker on Vimeo.
For fans of Tubelord, the band has prepared a secret password protected website (details hidden amongst the album artwork), which allows the most attentive fans to log in and access the album’s lyrics and also a comprehensive appendix which references hundreds of writers and publications.
Although there is a lack of self-written lyrics, R O M A N C E is very much still a Tubelord record. In fact, the lead single “My First Castle” may possibly be their finest example of a pop song yet. The vocals are as distinctive as ever, the lead singer sings with as much belief to convince you that each and every word is deeply personal and of relation to both him and the band. The drumming skills of David Catmur interweaves harmoniously with the bass lines of Tom Coulson-Smith, each emphasized by the most recent addition of synthesizers and keyboards.
R O M A N C E is the first album release from Pink Mist with “My First Castle” as the album’s lead single. With the release of R O M A N C E right around the corner be sure to mark your calendars and check out this album on both cassette and digital download.
Album Track Listing:
1. Over In Brooklyn
2. Never Washboard
3. 4T3
4. Charms
5. Here Is Nothing
6. Go Old
7. My First Castle
8. Ignatz
9. Waterworld
10. In Greenland
11. Tidy Diggs
October:
13th: KINGSTON, the works
14th: SHEFFIELD, the bowery
15th: NOTTINGHAM, chameleon artscafe
16th: LEEDS, Brudenell(brainwash) DAY SHOW
16th: MIDDLESBROUGH, unclealbert’s
17th: LONDON, upstairs at thegarage
18th: PLYMOUTH, the white rabbit
19th: FALMOUTH, watersportscentre
20th: CARDIFF, clwb lfor bach(BSM stage @ SWN)
21st: BRIGHTON, the haunt