October 29, 2011
Thrust Management announces the KillerTours.com Presents “The Chronicles of Gnarnia Tour” featuring: US, FROM OUTSIDE, DECODER and IN OTHER WORDS Trek Kicks Off December 3rd in Twin Lake, MI

Thrust Management announces the KillerTours.com Presents “The Chronicles of Gnarnia Tour” featuring: US, FROM OUTSIDE, DECODER and IN OTHER WORDS. The tour will kick off December 3rd in Twin Lake, MI and will travel through the Midwest and East Coast of the United States finishing up on December 19th in Joliet, IL (dates and cities listed below). This tour will be an amazing display of the raw musical talent and power coming out of these up and coming acts.

Tragic Hero Records artist US, FROM OUTSIDE debut album “Inspired By The Threat Of Failure” showcases the band’s finely tuned sound, as well as the current sonic progression in music that is taking over the indie scene right now. With their colliding musical styling and experimental vocals, Us, From Outside doesn’t seek to stand out of the crowd; they tower above it. The band’s music lulls the listener into a carefree utopia one moment only to pull them to the ground with brutal screams perfectly injected in a sea of melody. “Inspired By The Threat Of Failure” will have a lasting impact on the Indie community and upcoming “Revived” will surely be a point of influence for bands to come.

DECODER (Rise Records) is a band rooted in the idea of doing something unique, new, and unheard. Rising from the ashes of previously signed bands (OCEANA, VERSA EMERGE and OF MACHINES), the band became a well seasoned unit. After months of demoing and honing their sound, the band enlisted Matt Malpass (Manchester Orchestra, Copeland, Relient K, Lydia) to help them craft and record their debut full length. Taking elements of prog, rock and screamo, DECODER is a bands band and much, much more.

New Jersey based IN OTHER WORDS (Tragic Hero Records) will be opening this tour in support of their most recent release “Patience”. 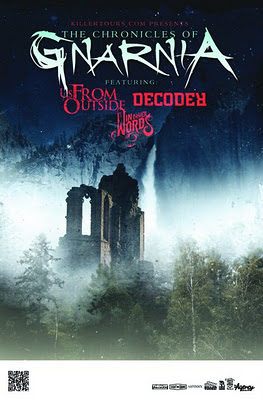