On Saturday we featured a Free MP3 from Los Campesinos and their new video for that track By Your Hand, alongside UK tour dates. Get your free track and watch the video here.

Now its time to introduce you to their album. 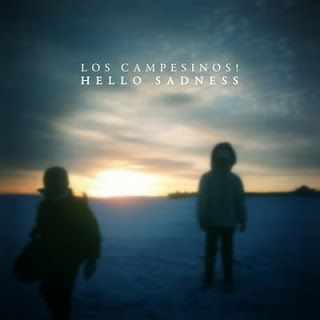 Hello Sadness is ten songs of love, loss and heartbreak nail-gunned to a back- drop of broken, tangled bodies, creeping, dead-eyed animals, suffocating, looming shadows and World Cup exits. It is an honest, bare-bones documentation of breaking up and trying not to break up in the process. A record whose complexion changed dramatically when, on the eve of recording, the end of a relationship meant every word that had been penned before had to be rewritten.

“It feels like we’ve done all our growing up while in this band,” says vocalist Gareth Campesinos! “Not like we’re Hanson, or anything. But we’ve been Los Campesinos! since finishing university, and in that time we’ve all changed as people massively. That’s something we want to put across in the music.”

As a result, Hello Sadness is a record made by a band united, all pulling in the same direction with the result being Los Campesinos!’ most lean, direct, coherent, and simultaneously exhilarating and debilitating collection of songs to date.

The album will be available as a pre-sale bundle from the Los Campesinos! website (loscampesinos.com). The package includes a CD/vinyl copy of Hello Sadness plus a digital download, an exclusive, limited edition DVD of footage from the recording of the new album (including a documentary and a How To Play… feature) plus an exclusive, pre-order only ‘Palmist’ T-shirt and Hold On Now, Youngster… The Demos, a CD of recently unearthed demo versions of songs from Los Campesinos!’s first album. It includes rare track How I Taught Myself To Scream and the previously unreleased No Tetris.

By Your Hand
Songs About Your Girlfriend
Hello Sadness
Life Is A Long Time
Every Defeat A Divorce (Three Lions)
Hate For The Island
The Black Bird, The Dark Slope
To Tundra
Baby I Got The Death Rattle
Light Leaves, Dark Sees pt. II