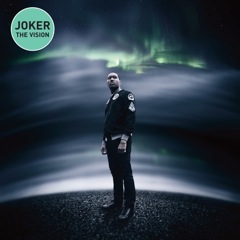 Today, he’s announcing that the initial pressing of the LP will come with a bonus disc of instrumentals for all the album tracks that have vocal contributions on them. The running order is below…

Ahead of the album’s release, Joker premiered his new single on Annie Mac’s Radio 1 show whilst guesting on her show last Friday night. Entitled ‘On My Mind’ and featuring William Cartwright on vocals, it’s getting a full release on December 5th. You can hear the track played out on her show here or from the 4AD site here.

The single will be available as a remix 12″ also with mixes from both Goldie and Rustie on the A side, with its flipside featuring remixes of his last single, ‘Slaughter House’ from Tiesto and TC. You can hear the remix from Tiesto here.

Having just returned from an extensive tour of Australia and Japan, Joker is heading next to New York and will be performing at CMJ over the weekend. To coincide with his US shows, a version the track ‘The Vision (Let Me Breathe)’ has appeared with a guest verse from Freddie Gibbs online – here.