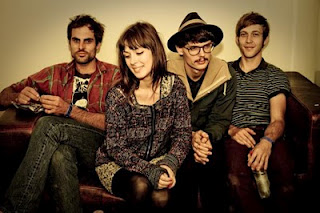 With it’s instant-classic hook-line and irresistible guitar stabs, Forest Fire serve notice of a distinct sharpening of focus in their sound with their first release for FatCat, ‘The News’, released as a single on 10th October. As songwriter/ vocalist Mark Thresher explains, “This record is our attempt to be more of an ambitious songwriter/ rock band, rather than a weird folk band.”
And the new ambition pays dividends. With their forthcoming sophomore ‘Staring At The X’, Forest Fire reject the ‘what’s next’ attitude plaguing so many of the NYC/ Brooklyn scene and bring together swaggering, guitar-led breakdowns that recall NYC forebears The Velvet Underground or Television with romantic, darkly insistent British new-wave-styled pop. Even extended space-outs make an appearance, particularly in the sinister funk of album centerpiece “They Pray Execution Style”.
‘Staring At The X’ is an electrifying leap forward from the “cosmic Americana” of their debut, Survival – a record more highly praised in some quarters than contemporious releases by Fleet Foxes and Bon Iver, and described by Rough Trade Shop as “an absolute revelation” – naming it one of their 2009 Top Ten. The Guardian’s Paul Lester meanwhile found “a general air of beat-poet cool and a careless articulacy to the lyrics that heightens the impression of the band as quintessential SoHo bohos.”
Forest Fire has spent much of the time between releases touring, crossing Europe three times last year – once supporting Phosphorescent, and twice headlining their own shows and playing festival dates, including End Of The Road and France’s Route Du Rock. They’ve shared stages with the likes of Sharon Van Etten (who contributed guest vocals to Survival), Xiu Xiu, Papercuts, Gang Gang Dance, Psychedelic Horseshit, Anna Calvi, Julianna Barwick and Cass McCombs, among others. 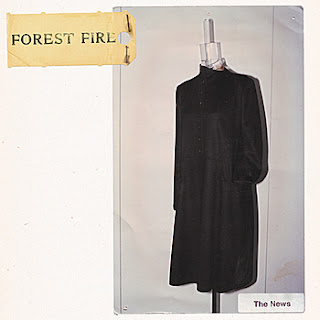 Stream The News:
Forest Fire – The News (FatCat Single B-Side ds7fat105) by Fat Cat Records
Stream To Be Honest:
Forest Fire – To Be Honest (FatCat Single B Side ds7fat105) by Fat Cat Records
Forest Fire play the AUTUMN FALLS festival in Brussels (21st-27th November Autumn Falls 2011) and will be touring the US and UK widely in support of Staring At The X.
Forest Fire is: songwriter/vocalist Mark Thresher, guitarist/multi instrumentalistNathanDelffs, Bassist/multi-instrumentalist Natalie Stormann, drummer Robert Pounding, and producer/keyboardist Adam Spittler.
Get More:
http://www.myspace.com/fuckforestfire