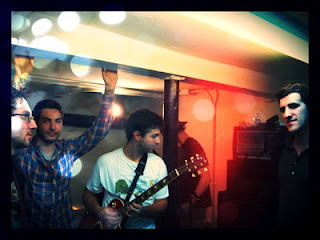 Naming influences such as Jimmy Eat World, Sunny Day Real Estate, Further Seems Forever, Saves the Day and Hot Water Music, the band will enter the studio with producer Mike Sapone (Brand New, Taking Back Sunday) this winter to begin work on their label debut, due out spring 2012.

What others have said about DAYTRADER:

“Initially conceived as a collaborative effort between bassist Gary Cioni (ex-Crime In Stereo) and drummer Pat Schramm (Bridge And Tunnel, ex-Latterman), Daytrader drip with enthusiasm for an era of punk not long gone from the minds of these two dudes… Sounds like five guys trying to recreate something pure, fast and enjoyable from their youth—and totally succeeding.“- Alternative Press
“Dismantle pop-punk’s funeral. Tell the eulogy singer that his work here is done and send the pallbearers on their way. Yes, 2011’s Last Days of Rome is here, and pop-punk is alive and well as ever.”- SputnikMusic
“Daytrader have caught lightning in a bottle…”- Punknews.org

“…independent, raw and, quite frankly, reinvigorating.”- Absolutepunk.net
“…one group you’ll definitely want to watch… it is safe to say that Daytrader are on to something pretty spectacular”- Underthegunreview.net