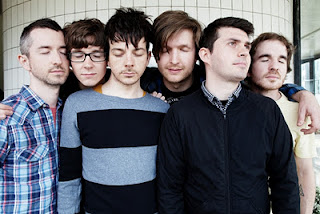 After announcing their decision to call it a day, the fantastic Dananananaykroyd hit the road one more time tomorrow to play their last ever string of shows. It’s a last chance to see the band who have regularly and deservedly been described as “the best live band in the world”.
To celebrate the send off, the band are streaming their new Ross Robinson produced album ‘There Is A Way’ in full for you to share. Released earlier in the year, the album is both their heaviest and most positive work and is well worth a listen!
Dananananaykroyd – There Is A Way by WorkItMedia
“We all still love each other very much,” said the group, “for a band called Dananananaykroyd we’ve done more than we ever expected or possibly even intended and we’ve enjoyed nearly every step of the way. We’re very keen at the same time to make sure we’re never compromising or giving anything less than 100% and at this juncture of our collective lives, it makes sense to go out with a bang – which is exactly what this tour will be.”
Following shows in Leeds and Bristol, Dananananaykroyd’s 12-date farewell tour begins in hometown Glasgow and ends in a giant sphere of blood, guts, human flesh, fire and rock in Newcastle on 12th November and calls over the UK beforehand.
The band will release their final single ‘Think & Feel’ digitally on 7th November 2011.
See Dananananaykroyd on tour one last time:
OCTOBER
31 – Manchester Deaf Institute
NOVEMBER
1 – Leicester Firebug
3 – Brighton The Haunt
4 – London KCLSU
5 – Derby Victoria Inn
6 – Stoke Sugarmill
7 – Portsmouth Wedgewood Rooms
8 – Exeter Cavern
10 – Oxford Bullingdon
11 – York Fibbers
12 – Newcastle Cluny
Get More:
www.dananananaykroyd.co.uk
@dananananaykroy