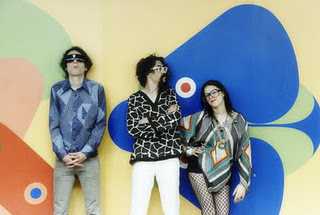 Following our recent promotion regarding the new AIDS Wolf release, the band now have more news.

Aids Wolf are proud to present a new music video from their 4th album ‘Ma Vie Banale Avant-Garde’. Directed by Harrison Owen of Fingered Media, “Like PSHTS of Aerosol” captures both the bands current psychedelic leaning and their career-long dedication to evil in one visual swoop.
AIDS Wolf, ‘Like PSHTS of Aerosol’ from fingered media on Vimeo.
Montreal’s AIDS Wolf are very proud to announce the release of their fourth lp and first double lp, titled Ma vie banale avant-garde on October 4th, 2011. The album was recorded at Dub Narcotic Studio in Olympia, WA and produced by AIDS Wolf.

The corpus of songs recorded for the album were written over the course of a year as the band shifted from its more formal work to a sound more focused on polyrhythm and flowing, elastic tempos. Fields of dissonant guitar and demented, lurching tempos, on further listens, give way to pixelated pop forms albeit with a detuned loner dinosaur in its spotlight. There’s no denying that the re-energized trio sounds like a whole new band on Ma vie banale avant-garde.

In AIDS Wolf’s compositional approach the band “learns its mistakes”, composing songs by learning improvised passages off blown out cassette tapes recorded on a trusty GE tape portable device. Aiming to dampen the repetition endemic in most music, AIDS Wolf adds elements of chance and non-repetitive phrasing. Songs evolve organically and seem to continue to evolve even after having been “Fixed” on record.

In this frame AIDS Wolf remains devoted to forwarding and refining their musical vision; seeking new musical challenges for themselves as artists and for their audience.

AIDS Wolf nevertheless maintain a clear lineage with rock structures. They’ve just taken the basic elements of guitar-driven rock and pushed them as far into their own little corner of the world as possible — and with a fair deal of success, it should be added. Provided that a listener is wiling to follow them into their shuddering, squealing alleyways, there’s a lot of visceral pleasure to be found here.— TINY MIX TAPES

AIDS Wolf’s monastic commitment to brutal prog-punk and strident no wave has hardened their music from a rough lump of coal into a jagged diamond.— PITCHFORK

Yes, it bears some surface resemblance to the No Wave bands of New York’s late ‘70s, and yes, it’s also quasi-Beefheartian, but this simmeringly ugly-beautiful noncategorizable thing that is the band is like an object lesson in modern, progressive, painfully pure music.— LA WEEKLY

[AIDS Wolf] make you feel uneasy and nauseous, but also a lot of strange emotions that aren’t so easily named, and that are rarely evoked by more conventional approaches to music.— NOW TORONTO

The band have stated you should catch them live now whilst you can as it may be some time before they tour again.

Lovepump United are giving away free AIDS Wolf posters AND a free digital download of ‘Ma Vie Banale Avant-Garde’ to anyone that sends in a SASE to the label. Lovepump and AIDS Wolf understand that not everyone can afford to buy records these day. They also understand that anyone who wants to hear an album can find a place to download it for free. So they have put together this offer to make your experience a little more exciting than just scouring mediafire links.

Owen – Too Many Moons – Live on His Front Porch [Video]