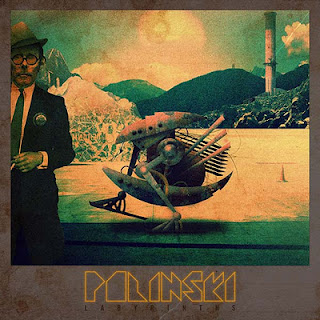 In September we shared the news following 65daysofstatic’s Paul Wolinski solo album Labyrinths which is set for release on October 31.

Here are some great words about the album, penned by Joe Shrewsbury from 65daysofstatic:

After ten years (give or take) on the road and on the record with 65daysofstatic, Paul Wolinski finally steps out from behind that particular outfit’s notorious smokescreen and emerges as POLINSKI, a man with a laptop, some synths and a plan, in the meta-physical sense of the word.

In our childhood bedrooms and minds, the possibilities were always endless, there were worlds within worlds, and galaxies upon galaxies. If the suburbs outside seemed limited by how far we could get on our bikes, then in the real and unreal realities of space travel and science fiction we were satiated, if only momentarily. What if your bike could take off?And it is to there that POLINSKI has returned, to soundtrack the impossible possibilities of the sci-fi mentality.

Says Wolinski “This is basically an album I daydreamed of writing back when I was 15 and just learning how to program MIDI…lots of beats and distortion and piano and big melodies, with a dance-y toughness.”Written in-between or on tour, this is the sound of software catching up with what the mind is capable of, the simple joy of the back of a van and a laptop, an airport lounge and a head between timezones, lightspeed drifting between futures, the futures we glimpse out of the window of the flimsy vessels we trust our lives to, the futures we dream of in the hotel room after one too many in-flight drinks-in-the-sky.

Feeding himself a steady diet of 70s and 80s sci-fi movies and endless 2nd hand paperbacks from the golden era of sci-fi publishing, and free of the myopic shortcomings of writing music in a room with 3 other people, this is music that is unconstrained in its search for warp speed, the 1.21 gigawatts that launches the listener back to the future.

Examining the impulse that feeds the creative urge is a dangerous thing to do, especially in these cynical post-everything times, but taking that pulse is not. If sci-fi is the best metaphor for all that could not be articulated in the solitary bedrooms of our formative years, then music is its best simile. ‘LABYRINTHS’ may not be able to tell you how existence feels, but it can let you hear it. And some things are better left unsaid.

If this sounds heavy, then it is, but that would sell short the upbeat nature of Polinski’s current output. We may be headed for a black hole, but we may as well dance as the planets explode. – Joe Shrewsbury, 65daysofstatic

The brilliant artwork was created by the wonderfully talented Caspar Newbolt of Version Industies. Caspar also did the artwork for 65daysofstatic’s previous studio album ‘We Were Exploding Anyway’ and the DVD video for their ‘Escape From New York’ live album.

The album will be released on CD and digital formats, as well as heavyweight 180 gm vinyl on a choice of black or white vinyl and including a free CD of the album plus an A3 poster.We will have a special pre-order-only bundle for the album with a limited edition T-shirt, as well as pre-orders for the the CD, Vinyl and digital formats alone, available in our web shop soon, all details below.

The album’s tone is set with the John Carpenter-esque ’1985-QUEST’, which explodes into a glorious wall of lush synths and distorted snares before establishing the towering melodies which snake and writhe throughout.

Robot voices struggle to be heard above the towering pad layers of ‘STITCHES’, but never without the pulse, the beat, the drive, and the concise attention to arrangement that comes with listening to too much pop music.

‘TANGENTS’ takes each one of these ideas and fractures them into a billion cathedrals of noise over a relentless punching beat. By the time we reach ‘STILL LOOKING’ the pulse quickens – this is feet on the floor 4/4, this is all those moments, those nights of abandon, those mid-week regrets.

But it is in the second half of the record that we truly reach deep space. ‘LIKE FIREFLIES’ – like robots navigating unknown landscapes searching for lost cyborg lovers while the universe implodes, like music is music is music.

On closer ‘A WALTZ OF LIGHT’, the tide turns, and we are left on the edge of the water, gazing backwards to what came before us, the needle in the groove, the retrograde dynamics orbiting a fixed point somewhere down in the depths as they spin finally out from an imploding piano line, where we catch just the faintest light of the faintest pulse, a dying star.

“Even in the thickest analogue bubblebath, the digital heart beats on.”

You can listen to Polinski’s Tangents streaming below, also available as a free download-
POLINSKI ‘TANGENTS’ by Monotreme Records
Track 3 from debut album ‘Labyrinths’ by Polinski (aka Paul Wolinski of 65daysofstatic).

Album out 31 October 2011 on Monotreme Records. Available on CD and digital formats as well as deluxe 180 gm vinyl (black or white) with free album CD, poster and digital download. Pre-order now to receive 5 bonus tracks plus sticker and badge (while supplies last) or to order limited T-shirt bundles: http://monotremerecords.limitedpressing.com/product/categories/2169