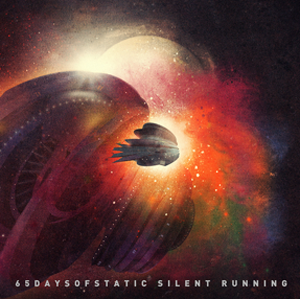 At the start of 2011 65daysofstatic did a live rescore to the 1972 sci-fi film Silent Running at the Glasgow Film Festival. At the time, it was thought that it would be limited to those two nights but that expanded and there became a demand for release. So this is exactly what 65daysofstatic have done.
“Writing it has been a cluster-fuck of messy technology and syncing issues that we will hopefully sweep into the corners of the stage and cover with a rug of sci-fi bleeps and pointless-but-fun melodrama. The music is original, noisy, and kind of old-school 65, inspired by watching a man in an all-in-one talk to a rabbit, eat a melon and engage in aggressive gardening.” 65daysofstatic
This Silent Running soundtrack has been pressed onto heavyweight vinyl –the only way they could do it to fit with the warm analog fuzz of the original film. Having a record released this way has also necessitated the tumultuous return of Dustpunk Records – a beast that has long lain dormant. It released the bands first ever EP ten years ago. If this project succeeds and rouses it from its slumber, who knows what else the future could hold…
Burial Scene, taken from the album is available as a free download here:
Burial Scene by 65daysofstatic
LIMITED EDITION SILENT RUNNING TRACK LISTING
Side A
Overture
Space Theme
The Announcement
Safe Distancing
The Scattered Disk
Burial Scene
Side B
Broken Ship Ruse
Surgery
Space Montage
Rantaloupe
Finale
Bonus EP for the digital version includes the following tracks:
1. Save the Forest
2. Cosmic Wind
3. Valley Forge Theme
4. Shovel Fight
AVAILABLE FROM: store.65daysofstatic.com
The final Silent Running show of 2011 will be at the Duke of York’s cinema in Brighton, on the 25th November.
Get More:
http://www.65daysofstatic.com