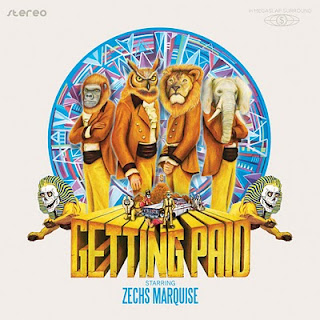 El Paso-based psych-prog five-piece Zechs Marquise is set to release its sophomore album, Getting Paid, on September 27. The band is three-fifths Rodriguez Lopez — brothers Marcel, Rikardo, and Marfred — a surname that gained music-industry clout from Omar, the prolific Mars Volta guitarist (and head of Zechs Marquise’s label).
The Mars Volta sibling band Zechs Marquise premiere another track from their forthcoming new album, Getting Paid today via ALARM Press. The song, “Static Lovers” is available HERE. The quintet also launches a short headlining tour of the Southwest next week, culminating in an album release party in Los Angeles on Wednesday, September 28th at The Airliner. Please see complete dates below.

Another song, “Everlasting Beacon of Light” — featuring guest vocals by Matthew Embree — was released in August and is available for download/streaming HERE.

Zechs Marquise, the El Paso, TX quintet are back with their sophomore album Getting Paid, bringing an intensified swagger to the band’s multifaceted psych-prog haze for their most aggressive and versatile effort to date. “We liked that hip-hop attitude,” explains drummer Marcel Rodriguez-Lopez of the album title. “Getting your piece, taking yours.” And, Getting Paid certainly finds the band fully taking charge of their musical destiny.

In the years since their auspicious 2009 debut Our Delicate Stranded Nightmare, Zechs Marquise toured extensively throughout the U.S., proving to be a formidable live act supporting Omar Rodriguez Lopez Group and RX Bandits as well as leading their own headlining tours. Zechs Marquise have also grown considerably in other ways. Recent addition Rikardo Rodriguez-Lopez on keyboards and trumpet joins his brothers, drummer Marcel and bassist Marfred alongside guitarists Matthew Wilkson and Marcos Smith contributing to the band’s expanded sound. Not only have they reached new plateaus of entrancing riffs and rhythms, but Getting Paid also integrates vocals on select songs, including guest performances by vocalist/guitarist Matthew Embree and El Paso singer Sonny Baker.

The album was entirely produced and engineered by Marcel. “We started off recording percussion to sequencers and loops,” he explains. “I chopped those sounds up and arranged them. From there, were wrote the album with each of us coming in and playing on top of it. Kind of like a hip-hop song.” Considering the hectic tour schedules of both Zechs Marquise and The Mars Volta (in which Marcel plays keyboards and percussion), the band was forced to work on the album over an extended period of time in between both band’s tours. “It gave us a lot of time to get perspective on the songs,” Marfred says. “We’re really happy with and proud of this record.”

Once all parts were composed using the studio as a tool, the band re-recorded the album live. “We wanted something to represent our live energy,” says Marfred.

“The album cover is a play on Blaxsploitation soundtrack art and stuff like (Miles Davis’) Bitches Brew cover,” Marfred explains. “We wanted our own weird take on it.” Likewise, Getting Paid is throughout a wickedly wild take on elder forms of free jazz, skronk excursions, proto-funk and psychedelia with assertive tones and rhythms.

Getting Paid will be available everywhere on LP/CD/digital on September 27th on Rodriguez Lopez Productions via Sargent House.