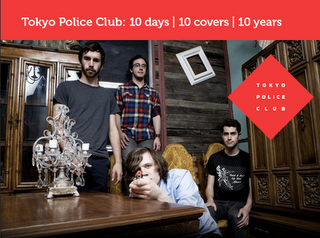 Tokyo Police Club show nowboundaries in their newest and unique project 10 Days, 10 Covers, 10 Years.
Tokyo Police Club are: David Monks – Vocals, Bass. Josh Hook – Guitar. Graham Wright – Keyboards and Greg Alsop- Drums.
The band ended up creating a project of which the band covers a single track from each year between 2001 – 2010 and released them on various music media outlets from August 24 – September 3.
The project called Ten Days, Ten Covers, Ten Years was a new challenge for the men. For 10 days the band gave themselves 10 hours to complete one cover. They did this 10 times, for each year in the previous decade. They covered all types of artists, such as: LCD Soundsystem, Jimmy Eat World, The Strokes, Kelly Clarkson, Phoenix, Queens Of The Stone Age, and more.
Listen to the outcome below featuring various guest musicians such as  Passion Pit’s Michael Angelakos and M83’s Morgan Kibby.
The band have been documenting their constant progress via their facebook  – facebook.com/tokyopoliceclub,
Listen now via their soundcloud-
Tokyo Police Club: 10 Days, 10 Covers, 10 Years by TokyoPoliceClub
Get More:
http://tokyopoliceclub.com/
http://www.myspace.com/tokyopoliceclub
http://www.twitter.com/tokyopoliceclub
http://www.youtube.com/wearetokyopoliceclub