September 24, 2011
In the past few months This Town Needs Guns have been non stop. With an announcement Stu will no longer be with the band after the last show on 16th September at The Borderline, a new 7″coming out on Sargent House (of which will feature the final 2 tracks with Stu’s Vocals) details of a new album and now the band have just announced a tour.
But sadly the 16th has passed, a respectable turn out to Stu’s final live show with TTNG, and a show that has been highly praised. Watch the set below.
This Town Needs Guns live-
Created by Charlotte Knight. Although on a basic camera she does professional film work.
www.charlotteknightproduction.com Twitter: @filmcharlotte
This Town Needs Guns will be touring the UK this December tickets for all shows can be found HERE. They will also have the new 7″ previously mentioned, on tour for sale as well. Dates below. 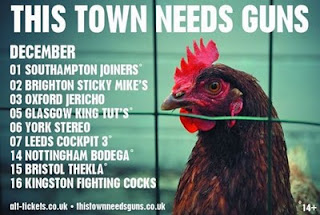 Just a few days ago the band recorded an acoustic song at home, this track titled “Ron Jeremy Beadle” is featured below and has already had a fantastic reception.
Love this single, you can download it here.
We wish Stu and TTNG all the best and will feature their forthcoming album next year.
Get More:
http://www.thistownneedsguns.co.uk
http://www.sargenthouse.com
http://thistownneedsguns.tumblr.com/
http://www.myspace.com/thistownneedsguns
http://www.last.fm/music/This+Town+Needs…