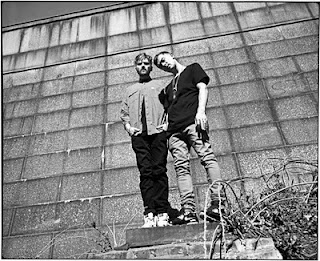 THE BIG PINK TO RELEASE NEW SINGLE IN NOVEMBER, VIDEO ONLINE NOW
The Big Pink return this November with ‘Stay Gold’, the first new track to appear from their forthcoming second album, Future This, due for release in January 2012.

‘Stay Gold’ was given its world premiere by Zane Lowe when he played it as his Hottest Record In The World on his Radio 1 show last night. Being released as a single on 4AD on November 7th, it shows the band have lost none of their verve in their time away from the spotlight.

Written with references to both an article by Stanley Kubrick in Playboy in the late-60s and Robert Frost’s Pulitzer Prize winning poem, ‘Nothing Gold Can Stay’ (which also featured prominently in the book and subsequent film, The Outsiders), ‘Stay Gold’ is about finding things that make you happy. In Milo’s case, that was graffiti when he was a kid; a subject that runs through the artwork for their forthcoming second album.

The accompanying video was directed by rising star Ollie Murray, who recently made his solo directorial debut with the excellent promo for ‘Still Life’ by The Horrors. It can be viewed now on the band’s website – www.musicfromthebigpink.com.

The Big Pink will be announcing their first run of UK shows for well over a year in the coming weeks.