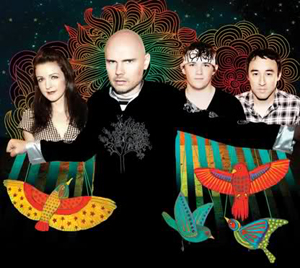 The Smashing Pumpkins have created one of the most acclaimed bodies of work in musical history and sold over 30 million albums. They are now hard at work putting the finishing touches on Oceania, which will mark their first full album since 2007’s Zeitgeist. Oceania is “an album within an album,” part of their in-progress 44-song work Teargarden By Kaleidyscope. Featuring 13 new songs, Oceania will be released in early 2012.

Formed in Chicago in 1988, The Smashing Pumpkins released Gish, their influential (and platinum) debut in 1991, which was followed by more platinum and multi-platinum albums including the nine-time platinum Mellon Collie And The Infinite Sadness and the four-time platinum Siamese Dream as well as the platinum certified 1998 album Adore. The pivotal group’s many hits defined the alternative music era and continue to resonate on modern rock radio, influencing a whole new generation.

The Pumpkins returned in 2007 with their gold-certified and acclaimed sixth album Zeitgeist, which entered the charts at Number 2 in the U.S. and in the Top Ten internationally. Since their triumphant return to the stage in 2007, the Pumpkins have headlined some of the biggest events around the globe including the Reading Festival, Rock Am Ring, and V festival.

In 2008, the band was inducted into Hollywood’s RockWalk. Their first post-major label release was the song “Superchrist,” issued via the Guitar Center CD Fresh Cuts Vol. 2. They subsequently recorded the song–the modern rock hit–“G.L.O.W.” for the Guitar Hero® World Tour game, marking the first time a band has recorded a new song exclusively for the franchise. In November 2008, the band released their first live DVD, If All Goes Wrong. In December 2009 The group’s BILLY CORGAN has said the band’s new music “harkens back to the original psychedelic roots of The Smashing Pumpkins; atmospheric, melodic, heavy, and pretty.”

This year, EMI Music will honour the legacy of THE SMASHING PUMPKINS with an extensive campaign that will see the iconic band’s albums from 1991-2000 reissued in fully remastered deluxe versions, each with bonus material.

The Smashing Pumpkins will be touring the UK this November: