September 27, 2011
An artist regularly featured throughout our time here. We’ve provided installments of singles leading up to the release of the new EP which saw light in August of this year. Before that we featured previous records in LoOmis’ extensive catalogue.
Another update from the artist Patrick Bailey, guitarist for New Orleans based instrumental band Smiley With A Knife who is the one man behind LoOmis’ sound- A new website and a new video which you can all find within this post.
LoOmis- Talk Like Whales Video
Taken from the EP Vellocet as previously featured and available as a free download here.
Vellocet
Release Date: 8/1/11
Label: Independent
01 – Vellocet (2:50)
02 – Slow Burner (3:22)
03 – Fugu (1:57)
04 – Talk Like Whales (3:52)
05 – War Elephants (2:24)
06 – Summer Drugs (2:55)
New Orleans’ native LoOmis, aka Patrick Bailey, returns with his 3rd release of the year, the EP ‘Vellocet’. Following the full length ‘A Solitary Attraction’and EP ‘A Dog & His Boy’, ‘Vellocet’ was crafted during the early summer months of 2011 in a friends bedroom while house sitting. Bailey continues with his lofi style of recording & writing most of the music on the spot while manipulating samples, creating loops and adding vocals with layers of math-rock influenced guitar work. On ‘Vellocet’, LoOmis replaces most of the odd time signatures of previous releases with hazy samples, touches of electronica and swirls of psychedelia. ‘Vellocet’ will be released digitally on August 1st 2011 for free or donation. LoOmis will be relocating to San Francisco during the release of ‘Vellocet’. There are 3 full lengths and 3 EP’s available on a “pay what you want” basis at LoOmis’ bandcamp page. All donations help out phenomenally.
WEBSITE
Check out the new website new website over at LoOmismusic.com
Where everything is more organized and you can download ALL records from previous projects  . Including Smiley With A Knife, Meadow Flow & Isabella.
Smiley With A Knife was an instrumental/math rock/post rock band based out of New Orleans from 2005-2011
They recorded 2 full lengths and 2 EP’s as an instrumental rock band.
SWAK has shared the stage which such bands as Tera Melos, HEALTH, Caspian, Maserati, Native, Unwed Sailor & many more.
Meadow Flow stared as a solo recording project around 2005 as a result of being displaced from hurricane katrina. It formed into a band circa 2007 and disbanded around 2010.
They released 1 full length as a band and recorded demos for a 2nd. Patrick put together 6 releases by himself.

ISABELLA was a band formed in 2008 and disbanded in 2010.
It features members of New Orleans bands Caddywhompus, Hi Five, Sam Sarah & Smiley With A Knife. They  released 1 EP recorded @ the living room studios in NOLA.
All of which can be downloaded at the new website.
WITHOUT WORDS
LoOmis has also just released another new album titled Without Words which is available now. 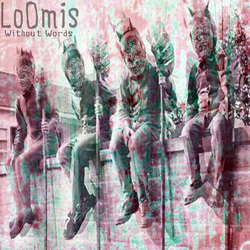 Without Words is Collection of instrumental versions of LoOmis songs from 2010 – 2011. Available to download for a $5 donation.


You can read all about this release here.