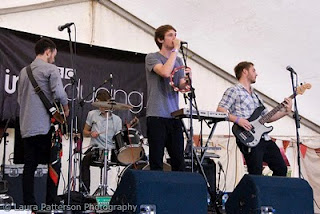 Known for their live performances they’ve supported The Rumble Strips and Wet Paint during their 2009 March Tour. Played with Jeniferever also throughout their 2009 tour. Sharing stages with such recognised names as And So I Watch You From Afar, 65daysofstatic, The Temper Trap, Animal Kingdom, Charlotte Hatherley of Ash, She Keeps Bees, Her Name Is Calla and God Is An Astronaut to name but only a few.

The latest 4 track EP from these Leicester stranglings is a slowly churning vortex of sound, light and colour creating soundscapes like no other. With hovering atmospheric sounds, Two Decades is a rich blend of delicate guitar riffs, synths and truly sincere vocals that define this band and in our opinion is some of their best work to date… ‘Silent Devices really do cement themselves firmly in our hearts with this, a true shoe-gaze classic. A lot of reviews use the old line that a song sounds like “the world ending”, if this is the case, Two Decades sounds like the remaking of the new world.’

‘What makes these guys stand out is the simplicity of it all. You can really tell that this band have grasped the absolutely essential concept that making a record is not about complexity, its about crafting a warm sound and layering each individual part meticulously, as to make every note, hi-hat, chord change and so on count and affect the listener.’

‘Leicester’s Silent Devices‘ music exists somewhere in the ether flitting effortlessly between the physical and the dream world. Their colossal multi-layered soundscapes transporting the listener to far-flung corners of the imagination and easing them back to reality at a whim. A journey on which they take the helm with such confidence and self- assurance that the listener has no option but to submit, strap in and enjoy the ride… ‘On Two Decades – Silent Devices have managed to create a wonderful musical journey. Their music manages that rare act of somehow being delicate whilst being simultaneously powerful.’

Listen to their new demo Verb via their soundcloud here-
Verb (DEMO) by silentdevices
Download their 2010 single Warmblood here-
Warm Blood by silentdevices
The Monograph recently uploaded their encounter with Silent Device’s following their journey throughout recording  new tracks ‘Moire’ and ‘Verb’ at  Seamus Wong with regularly featured producer/musician Jamie Ward, and their promising and incredible performance at this years Summer Sundae.
A promising band with much to offer, this won’t be the last we hear from Silent Devices.
Get More:
http://www.myspace.com/silentdevices
http://silentdevices.wordpress.com/