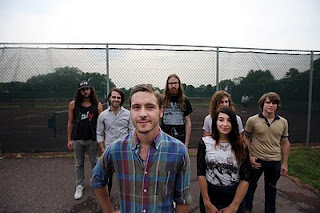 Following the release of their new self-titled full-length album out now on No Sleep Records, and US tour dates with Cusive frontman Tim Kasher, Albany, NY’s indie-punk hybrid Aficionado have announced a series of year-end, East Coast US tour dates opening for Thursday, mewithoutYou, Screaming Females, and Make Do And Mend. The band will also be kicking off a series of dates this weekend as main support to Maylene and The Sons of Disaster, followed by a one-off home-town show opening for Motion City Soundtrack (full itinerary below).

With ten songs produced and recorded with AJ Mogis (Bright Eyes, M. Ward, Cursive), and on the heels of their critically acclaimed “When It Comes To Creation” EP, the songs on Aficionado’s latest are sharp and more compact with less of an emphasis on wowing people with over the top antics and more of a focus on the songs themselves. The lyrical basis is centered on expositions of thinking for yourself, attaining what it takes to be a charismatic person, heeding to the realities of aging, and acceptance of change. Drawing from a range of influences such as Cursive, The Hold Steady, Sunny Day Real Estate and At the Drive In, Aficionado incorporates the sweet honey coated coo of Laura Carrozza which tinges the melodies and a harmonious male/female vocal styling alongside singer Nick Warchol.

On their new album, Aficionado have created an opus based on the basic concept of pure camaraderie and solidarity amongst good friends, with the aim of simply making good music.

LAST CALL Announce Upcoming Tour Dates with Born Without Bones, Pentimento, Young English, Such Gold, Koji, We Are The Union and more!‏