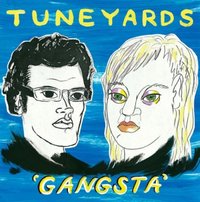 Following the unprecedented success of second album w h o k i l l which was released earlier this year, tUnE-yArDs return with a new single from that album. ‘Gangsta’ will be released digitally on 16th August, with the limited edition 12″ following on September 12th (27th in the US).

‘Gangsta’ recently took on a different shape when the band made their US TV debut on Late Night With Jimmy Fallon two weeks ago, with Merrill and the band performing it with The Roots.

This 12” takes the hip-hop inspired elements of ‘Gangsta’ even further with remixes from legends in the field, Adrock (Beastie Boys) and Cut Chemist (Jurassic 5, Ozomatli and DJ Shadow collaborator). Like all good old school records, the 12” is completed with not only the original but also with both the instrumental and a cappella versions of the track.

The Bronzed Chorus- Are we not speedwagon? [Single Stream]