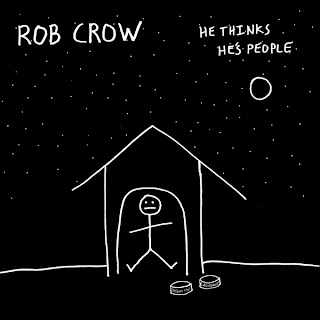 Rob Crow is back after a four-year wait with his latest solo effort, He Think He’s People. Out October 18 on Temporary Residence Ltd, the label is gearing up for the release with a sneak peek at the first two tracks. “Sophistructure” and “Scalped” will be available for 24 hours only on the Temporary Residence soundcloud, streaming below.
It’s been quite some time since the release of Living Well, Rob Crow ‘s breakthrough sophomore solo album that harnessed his many eclectic creative impulses into a half-hour’s worth of concise, compelling folk-pop. In that time, the Pinback co-founder has worked diligently on the long-awaited follow-up to Autumn of the Seraphs, welcomed two more children to his ever-expanding family, and incredibly found the time to write and record He Thinks He’s People.
Scalped
Rob Crow – Scalped by Temporary Residence Ltd
Sophistructure
Rob Crow – Sophistructure by Temporary Residence Ltd
More dynamic and eclectic than its predecessor, He Thinks He’s People marries Crow ‘s penchant for drawing inspiration from a variety of genres with an uncanny ability to create a subtle, relaxing mood throughout. This is likely attributed to his remarkable voice, a trademark that has helped make Pinback an institution for the past decade. The ease and sincerity with which he delivers lines as wrought as “Sometimes, just hope is the trap” – or playfully revels in the morbid demise of people who talk on their cell phones during movies – is what make Crow truly one-of-a-kind, and a shining light who continues to thrive on the outer edges of pop music.

And So I Watch You From Afar- Search:Party:Animal SINGLE