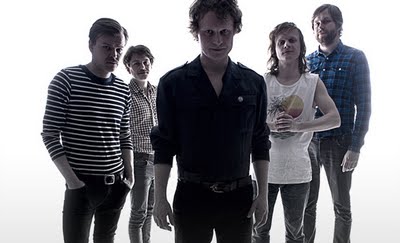 The Oslo based 6 piece consists of:
Thomas Bratlie – Lead vocals
Henrik Lie – Guitar, backing vocals
Marius Lübbe – Drums
David Bratlie – Guitar
Øyvind Røsrud Gundersen – Bass, backing vocals
Jon Arild Eriksen – Keyboards, backing vocals
New album- “Signs Of Fervent Devotion”- is out now.
Brand new video for new single “Carve Visage”.
Directed by Stian Smestad
We are Rumble in Rhodos. We are a band born in Oslo in late 2003. If you haven’t heard of us before, you’ve missed our three full-length albums, one E.P., and more than 200 energetic indie rock shows doused with touches of no-wave, danceable post-punk, while accented by obtrusive underground. Our album, INTENTIONS, released May 2008 received outstanding reviews throughout Scandinavia and Europe. You also missed us play in floorshows in basements, squats, pubs, and clubs throughout Europe to thousands of kids. You missed our month long headlining tour across Norway. You’ve missed five different home-screened T-shirt designs and our 2003 7” (with Commodore race cars on it). You have missed us play more than 30 big festivals, from the indie tents of 10 fans to the big stages of 10 000. You missed us win the award, “Favourite New International Artist”, at The Indies 2006 in Toronto, Canada. You’ve missed us winning Fadar magazine’s Dr. Dog award as “5 young dudes who have crazy moustaches, don’t dress up like assholes and don’t pose”. You missed us play with “These Arms Are Snakes”, “Thunderbirds Are Now”, “Wolf Parade”, “The Robocop Kraus”, “The Bronx”, “Health”, “DD/MM/YYYY”, “JR Ewing” and many other of our favourites. Most importantly, you have yet to meet 6 of Norway’s most virtuoso boys who have developed an aggressive and engaging sound which provides nourishment for both your muscles and your brain.
Last year we decided to hibernate. Our two fold focus was a third full-length album and to regenerate our creativity with a new expression. After seven years together as a band, it was time to include other forces of inspiration to find their right direction and become communicators of a quality atmosphere. The new album, entitled Signs of Fervent Devotion, speaks to the accomplishment of our focus. With producers Erlend Mokkelbost (JR Ewing, Killl, Montée) and Anders Tjore (Montée, Turns, Apricot), Rumble in Rhodos has, without a doubt, created their best album so far. Through our wild and magical studio sessions, based on trial and error, we have consumed the winter’s energy. The producers have pulled a formally exhausted musical effort to a nurtured new stage; folding each separate track’s dynamics into one another in a wonderful, edgy way.
We have fused a fascination of old fashioned Punk/Funk, Art Rock, 70’s Prog Rock, and modern indie rock into an expression which shakes your core and gently caresses the small of your back. Signs of Fervent Devotion, is mixed by none other than Brit, Nick Terry (Klaxons, Serena Maneesh, Libertines, Franz Ferdinand) and Tokoyo-based Alan Brey. They´ve added to the already ambitious and pulsating effort, a calm and balance needed to communicate the album’s ingenuity. While crafted in a cheeky and daring way, it shocks as it delivers. Rarely does such a hungry and greedy rock record from Norway, resonate so thoroughly. So, look out for this unusual breath of northern air, as Rumble in Rhodos release our third consecutive album on Tuba Records now! With a track list packed with hits and our most thoroughly crafted material to date, we have shone a light to our future sound. Already, on November 29, 2010, we released our first single, “White Dancing” as a T-Shirt and download code, through the label, Fysisk Format. The song has been a fixture on P3 radio station since the release and made it to Dagbladet’s list of songs of the year.
http://www.rumbleinrhodos.com
http://soundcloud.com/rumble-in-rhodos
http://www.myspace.com/rumbleinrhodos
http://twitter.com/RumbleInRhodos
https://www.facebook.com/pages/Rumble-In-Rhodos-Official/178702072140324