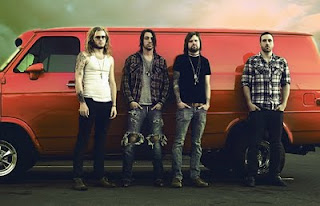 Hard rock innovators MAYLENE AND THE SONS OF DISASTER will release their long-awaited new album Maylene and the Sons of Disaster: IV on September 27 via Ferret Music. Produced by Brian Virtue (Jane’s Addiction, Deftones, Audioslave), the LP shines a spotlight on this celebrated band’s virtuosic prowess and depth of musical identity.  Alternative Press premieres their new track “Open Your Eyes” which can be heard here: Alternative Press | Features | Exclusive Stream: Maylene And The Sons Of Disaster’s “Open Your Eyes”.

In additional music news, Revolver recently premiered a second new MAYLENE track titled “In Dead We Dream” and talked with vocalist Dallas Taylor. Check that out here: Exclusive: Maylene and the Sons of Disaster Debut New Song “In Dead We Dream” – Revolver Magazine.

The striking cover art for Maylene and the Sons of Disaster: IV was designed by Forefathers Group (Children of Bodom, In Flames, Between the Buried and Me). On the record, the band continues its focused conceptual and lyrical bend, which plots MAYLENE as renegade outlaws from a 1920’s gangster/prohibition-era real-life crime family. The record’s gritty musical shootouts are filled with intricate guitar riffing and whiskey drenched grooves, and vocalist Taylor discusses it a bit further below :

“This is the most serious thing we’ve ever done and the most grown-up record I’ve ever made in my life. I think it will surprise a lot of people who were into Maylene before. It is a very dark record, but it’s the most truthful and heartfelt thing I have done in my life.”

Tireless road dogs, Maylene And The Sons Of Disaster – Dallas Taylor (vocals), Chad Huff (guitar), Jake Duncan (guitar / vocals) and Brad Lehmann (bass) – is in the midst of a 30 city U.S. tour with The Damned Things that will run through September 3. Fresh from tours with both Clutch and Protest the Hero, this new outing will bring the band’s hard-hitting live show to both new fans and loyal followers each evening. A full listing of upcoming live dates can be found below.