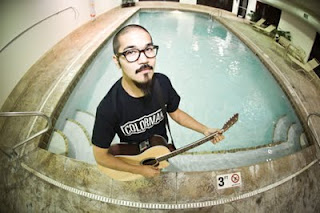 Alkaline Trio Cover Streaming Now
Harrisburg, PA artist and activist Koji (Run For Cover Records) is streaming his version of Alkaline Trio’s “She Took Him To The Lake”, taken from the recently released double CD tribute album, appropriately titled “A Tribute To Alkaline Trio”, available August 30 on Pacific Ridge Records.  Pre-orders can be placed now at http://pacificridgerecords.bandcamp.com/album/a-tribute-to-alkaline-trio  Other artists on the tribute album include Jonah Matranga, Into It. Over It., I Can Make A Mess Like Nobody’s Business, and many more.
Head to Koji’s Facebook page, and click the music tab to listen:
http://www.facebook.com/kojimusic?sk=app_182222305144028
Click the “contests” tab on Koji’s Facebook page to win a signed physical copy of the record, before you can buy it, along with a signed T-shirt:
http://www.facebook.com/kojimusic?sk=app_113913835365405
One Last US Date Until Fall
Koji has been added to support Such Gold at the Barbary in Philadelphia, PA on Wednesday, August 17.  Tickets are available at http://www.r5productions.com.  Run For Cover labelmates Basement, and Settle For Less round out an amazing bill.  This will likely be his last US tour date until fall.
Updated UK Tour Dates
Koji and his good buddy Evan (Into It. Over It.) are headed to the UK at the end of August, to celebrate the second pressing of their release, aptly titled IIOI/Koji, available now at No Sleep Records!
Updated tour dates are below:
8/26 – The Mercantile – Dublin, Ireland
8/27 – Crane Lane – Cork, Ireland
8/28 – The Basement Bar – York, UK
8/29 – Retro Bar – Manchester, UK
8/30 – Victoria Inn – Derby, UK
8/31 – Cockpit Room 3 – Leeds, UK
9/1 – Bloc Bar – Glasgow, UK
9/2 – The Banshee Labyrinth – Edinburgh, UK
9/3 – Offquay Practice Rooms – Newcastle, UK
9/4 – The Old Angel – Nottingham, UK
9/5 – Wagon and Horses – Birmingham, UK
9/6 – Le Pub – Newport, UK  (Circuit Sweet will be exclusively covering this live event)
9/7 – Fighting Cocks – Kingston, UK
9/8 – Bargate Castle – Southampton, UK (no IIOI)
9/9 – venue TBA – Brighton, UK (no IIOI)
9/10 – West Coast Bar – Margate, UK (no IIOI)
If You think you can host the Brighton, UK date for Koji, following a cancelation- email us and we will forward you onto  James Carpenter. House shows, DIY venues, we’ll play anywhere!
New Limited-Edition Merchandise Available!
Koji’s webstore, at http://colormake.bigcartel.com, has a ton of new merchandise available, including limited-edition shirts, a few remaining tour-exclusive shirts, and both colors of the 2nd pressing of the IIOI/KOJI 12″ vinyl split.  Quantities of some shirt colors are very limited, so don’t sleep on them!