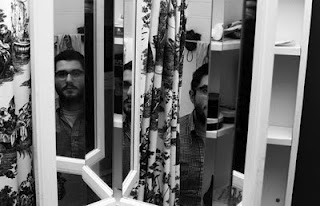 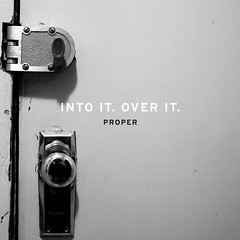 “Proper” Track List:
1. Embracing Facts 2. Discretion & Depressing People 3. Fortunate Friends 4. No Good Before Noon 5. Write It Right 6. Midnight: Carroll Street 7. Connecticut Steps 8. Staring At The Ceiling 9. An Evening With Ramsey Beyer10. Where Your Nights Often End 11. P R O P E R 12. The Frames That Used To Greet MeAbout “Proper” There’s something to be said about cohesiveness in music, most especially in this day and age where the art form of an album that provides the listener with an experience from start to finish is more and more becoming an antiquated concept. Evan Thomas Weiss (aka Into It. Over It.) however, who at 26 years and with his debut full length album “Proper,” has attained a level of depth in his songwriting not seen by most artists throughout their entire careers. Having written, recorded and played with an eclectic pedigree of artists such as Up Up Down Down Left Right Left Right B A Start, The Progress, and Stay Ahead of the Weather, IIOI’s culmination of experiences with said bands have stylistically fused together for the grand effort that is Weiss’ debut LP. The album’s release will mark a four year commemoration of his 52 Weeks project (where from September 2007 to September 2008 he wrote and recorded one track each week for a year, making them available online before being approached by No Sleep Records who released them as a 2xCD in June of 2009), as well as his Twelve Towns 7″ series/collection which featured recordings with artists such as Bob Nanna (Braid / Hey Mercedes), CSTVT, Everyone Everywhere, Pswingset, Empire! Empire!, and Such Gold, recently compiled for release on Topshelf Records. The new album also follows Weiss’ 2010 split release with friend Andrew “KOJI” Shiraki, named one of the year’s best overlooked releases by The Associated Press. The lyrical concepts of “Proper” and it’s all around aura stems from autobiographical and literal exemplifications which have taken place over the past year of Weiss’ life, most of which occurring in Chicago where he now resides. The album culminates in a heady yet straightforward melodic stew resembling Sunny Day Real Estate, Death Cab For Cutie and Dismemberment Plan to name a few, along with impassioned songwriting executed with the potency and ardor of Chuck Regan and Colin Meloy. While not labeled as a concept album per se, the stories which form the basis of Into It. Over It.’s songs stem from Weiss’ own personal experiences, but are still relatable by one theme and one theme only: Life. “Proper” was recorded at Blacklodge Studios in Eudora, KS and co-produced by Ed Rose (The Get Up Kids, Touche Amore, Small Brown Bike). The album features contributions from Nick Wakim of Stay Ahead of the Weather/CSTVT on drums and Nathan Ellis of The Casket Lottery. Album art was photographed at Weiss’ apartment in Chicago by Ryan Russell. There will be alternate layouts for the CD/LP and a tour with Frank Turner will follow in the fall. Pre-order the album here.For more information, visit:www.intoitoverit.com www.nosleeprecs.com