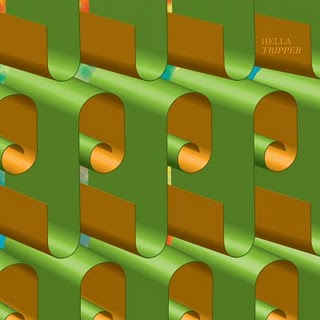 Over the last few months we’ve reported you the return of the 2 piece lifesmashing noise talent that is Hella.  We’ve featured their (at the time) untitled track, now named Headless, which you can download for free here. Various other studio footage and their album tracklist and art.
Stripped back down to the original two-piece lineup, they’ve announced and released the cover artwork and track listing from the forthcoming fifth album Tripper,  due out August 30th, 2011 on Sargent House.
You can now hear the regularly mentioned album in it’s entirety for free streaming below via the bands’ bandcamp-
Tripper Tracklisting:
01. Headless
02. Self Checkout
03. Long Hair
04. Yubacore
05. Netgear
06. Kid Life Crisis
07. On The Record
08. Furthest
09. Psycho Bro
10. Osaka