All Get Out
To Release The Season September 20th
On Favorite Gentlemen Recordings
Tour Kicks Off September 23rd
Their First Single “Lucky Bastard” is streaming below now. 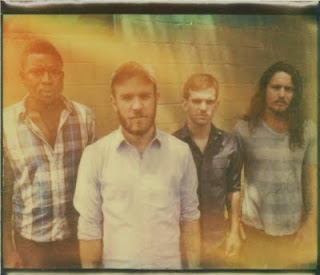 Charleston, SC indie rockers All Get Out will release their long awaited debut album The Season on September 20th via Favorite Gentlemen Recordings, the label/artist community founded by members of Manchester Orchestra and home to artists like Kevin Devine and O’Brother.


Listen to their first single Lucky Bastard streaming below.
All Get Out – Lucky Bastard by favoritegentlemen
“Loud and personal,” is one of the ways that lead singer/guitarist Nathan Hussey describes All Get Out.  One might add the term road tested, lest anyone think they haven’t earned the buzz that’s been building around their band. “We sound like we’ve been on tour for three years. We’ve been smoking and driving, and we don’t smell too good,” adds Hussey.
In 2007 the foursome from Charleston, SC found themselves with two EPs, stumbling into regular weekend tours of the South. Soon three days became a month and a month became six. A play-anywhere-for-anyone ethic kept All Get Out on tour for three years. A loyal fan base that has been equally enamored and entertained with their big ditch, bigger valley sound has grown with them, anticipating when the band would enter the studio again.
The wait is over now that the fall release of The Season is approaching.
Just as All Get Out accidentally ended up spending the formidable part of their ‘20s counting mile markers, so did The Season unintentionally transform itself into a pop record when the band began tracking with producer Matt Malpass (Lydia, Copeland). Still visceral and soul-bearing as before, The Season stretches All Get Out into the frequencies beyond reactionary abrasions.
Consisting of newer songs as well as some that were written as far back as 2007, the new album is “a book on the history of our band,” explains Hussey. “While touring is fun and a dream, there were times where all of us wanted a wall to punch and cry and wished we were home, or had a home.” Writing in the moment, truly unfiltered, each track displays specific moments of disarray the band found themselves in: broken friendships, fights, and empty wallets. In the end The Season is about moving past it all so you can keep on driving.
Which is exactly what the guys intend to do. All Get Out will be back out on the road starting September 23rd in Atlanta with Favorite Gentlemen label mates A: The Color and Junior Astronomers, after which they will launch select dates with Now Now (No Sleep Records) and Lydia.
All Get Out tour dates:
9/23 – Atlanta, GA @ The Masquerade %
9/24 – Columbia, SC @ New Brook Land Tavern
9/29 – Athens, OH @ Ohio University
9/30 – Akron, OH @ Musica $
10/1 – Lansing, MI @ The Loft $
10/2 – Chicago, IL @ Schubas $
10/3 – St. Louis, MO @ Firebird $
10/5 – Columbia, MO @ Mojo’s $
10/6 – Oklahoma City, OK @ The Conservatory #
10/7 – Austin, TX @ Emo’s #
10/8 – San Antonio, TX @ Jack’s #
10/9 – Dallas, TX @ The Loft #
10/11 – Orlando, FL @ Back Booth #
% with Junior Astronomers
$ with Now, Now
# with Lydia
Additional dates to be announced soon.
http://favoritegentlemen.com
http://loudasallgetout.com
http://twitter.com/allgetout
http://facebook.com/allgetout