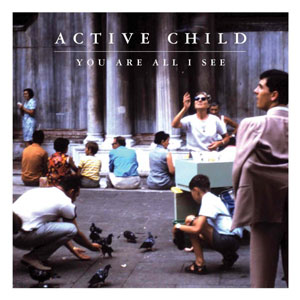 Active Child, the musical project from choirboy-turned-indie-pop musician Pat Grossi, is proud to release his full-length debut LP You Are All I See today via Vagrant Records. The album has already received critical acclaim, with All Music Guide noting, “2011 is a strong year for music in general, and You Are All I See deserves to be ranked among the best,” awarding the album with 4.5 stars. When Grossi recently shared his new songs in a live setting in Los Angeles a few weeks ago, the Los Angeles Times said, “…his set heralded one of the most original and ambitious sounds in Los Angeles this year.”


In conjunction with the album’s release today, “Hanging On” is featured as the iTunes free Indie Download of the Week, which you can purchase for free here:


Similarly, NPR is featuring “Hanging On” as the NPR Song of the Day, which you can listen to at the link below.


The digital version of You Are All I See contains two bonus tracks, in addition to the album’s 10 tracks. Included are the exclusive b-side “Call Me Tonight,” and White Sea’s remix of album track “Hanging On.” For the full tracklist, see below. Fans can also purchase the physical CD and vinyl record over at Amazon at the links below.


You Are All I See comes as a follow-up to last year’s critically-acclaimed Curtis Lane EP, which NPR praised as “a young singer and musician already living up to his own promise“. You Are All I See was produced by Ariel Rechtshaid (Cass McCombs, Glasser, We Are Scientists, Major Lazer) and features 10 brand new tracks, including “Playing House” – a collaboration with lo-fi r&b singer How To Dress Well – which Pitchfork praised in their premeire saying, “Active Child’s sound now seems positively ahead of its time.” “Playing House” is already available on iTunes, and can be heard on Active Child’s website, Active Child | Official Site.

Active Child are currently supporting the new album with their first headlining tour in the United States, including an ongoing residency at Los Angeles’ Echo theater every Monday night in the month of August. Having opened for the likes of School of Seven Bells, White Rabbits, and James Blake, fans will be treated on this tour to the first performances of Active Child as a full band. The tour officially kicks off on August 30 in Tucson, Arizona. Active Child and special guests electronic up-and-comers Com Truise and Chad Valley will be appearing in major cities across the US and Canada, including a sure-to-sell-out September 10 stop at New York City’s Bowery Ballroom. See all current dates below.

*With Com Truise
^With Chad Valley

You Are All I See Track Listing