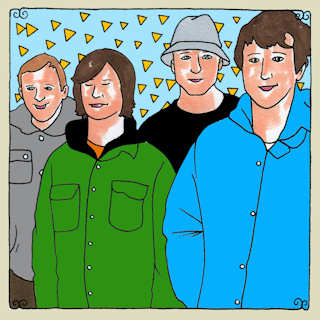 One of our favourite sites- the remarkable Daytrotter- have just published their recent live session with Tera Melos.
Frozen Zoo, taken from their Daytrotter live recording session is streaming below.
Love what you hear on this page, you can download their entire session for FREE via Daytrotters site here.

Tera Melos- Frozen Zoo Daytrotter Session by CircuitSweet
“They’re going to have enough to worry about when we die to get the music at our funeral right. It’s a tough job. There’s so much that we left unsaid. It’s not just us, it’s you and that guy and her too. We’ll all feel as if we were abbreviated before we were able to get it all spit out. There are going to be all those phone calls to break the bad news to all of the people who knew us. There are going to be flower arrangements to take care of and tears to cry. Someone’s gotta get the deviled eggs and baked beans cooked up for the luncheon to follow the short ceremony at the cemetery. There’s the casket and the very serious consideration of what we may have wanted buried with us. No one’s ever going to be able to get that right and there we’ll be, covered in dirt, our lifeless and bored body, eternally sharing a box with some shirt or beer koozie that one of our family members thought was our lucky shirt or lucky beer koozie. It’s enough to make you want to rot faster.
What we think we could handle would be a song or two from the Sacramento, California, band Tera Melos that seem as if they’d keep us company while we decomposed. The mash-up of two short tracks from the group’s latest full-length, “Patagonian Rats,” – “So Occult” and “Kelley” – sound married to one another here, helplessly devoted to the other in a swooping love affair that might be passing for something no longer of this world. Nick Reinhart, Nathan Latona and John Clardy give us the line, “We’re jumping out of our skin tonight/Something took my brain for a ride,” and it’s either a stab at the psychedelic or it’s a gentle way of suggesting that something tragic befell the main character. They sing, “I’m going to have to call you later,” but nothing in the way that they sing the lines, suggests that they’ll be in any hurry to do so and perhaps they’ll never have the chance. It sounds like a death welcomed and when they sing, “Singers writing songs always hate when they’re right,” we hear in the line what we want to hear, sitting here thinking about our demise. We think we hear that singers and writers hate to hear that they’re right when they’re right about it being the end, about there being nothing else out there. It’s when the end comes that we’ve really got a lot to think about.  “