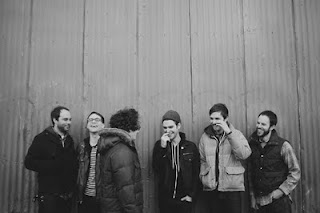 Pickwick, Seattle based uplifting 6 piece.
Consisting of-
Galen Disston
Michael Parker
Garrett Parker
Matt Emmett
Cassady Lillstrom
Kory Kruckenberg
Pickwick was formed in 2008 when singer Galen Disston left Los Angeles and relocated to Seattle, Washington. Originally an alt-country group, Pickwick spent the following two years trying to establish themselves in the Seattle Folk scene. Amidst a barrage of similarly-minded artists, the band struggled to connect with audiences and was on the verge of disintegration.
Around that time Disston heard Sam Cooke’s classic, “A Change is Gonna Come.” Floored by the poignance of Cooke’s voice, the band began experimenting with music that would allow Disston the same kind of vocal freedom. It was not long before the band had completely revamped their sound.

Raised on the rhythm sections of indie rock staples such as Spoon & The Walkmen, this new undertaking led the members of the band to dive deep into the catalogs of the Stax and Motown labels. By combining these two seemly different points of reference, Pickwick was able to cultivate a sound that was more organic and unique to the six members that compose the band.

As a nod to music from the past as well as their own love of vinyl recordings, Pickwick has begun to release their music through a series of 45’s that are also available via digital download.

The band is currently working on writing material for their debut full-length album, expected to be released in 2012.