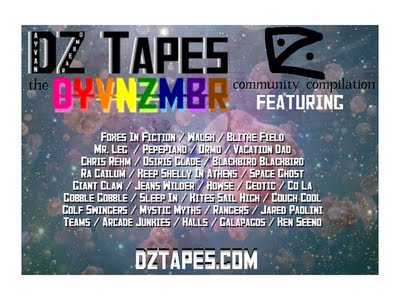 Just over 2 weeks ago we featured the campaign surrounding DZ Tapes.
Brett, a 24 year old  independent music distributor/promoter. His time is spent organizing a compilation of original tracks for a limited cassette release to promote the establishment of his new label DZ Tapes and the label’s aim. DZ Tapes is devoted to publishing lesser known works through the pocket sized, nostalgically tactile analog cassette tape medium. The work promoted is original and in the majority of cases, exclusive.
the DYVNZMBR community compilation feat.
KITES SAIL HIGH / WALSH / JEANS WILDER / BLITHE FIELD / GOLF SWINGERS
RANGERS / MR. LEG / KEEP SHELLY IN ATHENS / SPACE GHOST / RA CAILUM
TEAMS / HALLS / SLEEP IN / GALAPAGOS / CHRIS REHM / OSIRIS GLADE / CO LA
VACATION DAD / BLACKBIRD BLACKBIRD / PEPEPIANO / GIANT CLAW / ARCADE JUNKIES
FOXES IN FICTION / KEN SEENO / GEOTIC / HOWSE / GOBBLE GOBBLE / COUGH COOL / JARED PAOLINI
The reason we’ve featured the ambitions of DZ Tapes, click on the links above, awesome acts and some Circuit Sweet familiars.
We featured the campaign to get this tape into production and to our delight and with a thanks to you, the campaign was a success. The backing has made it possible for this to be done.
We will check back again when the tape is being released. In the meanwhile you can listen to some of the tracks here.
DZTAPES BLOGSPOT
DAYVANZOMBEAR FACEBOOK