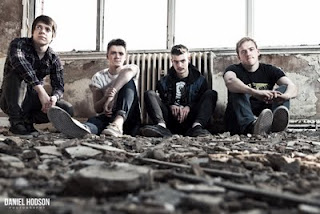 Romans are a 4piece midlands based band soon to explode over your radar if you haven’t already picked them up.
Consisting of Tom Sivell- Vocals/Guitar. Russ Milton- Bass, Denny Connolly- Dums/Vocals and Ben Winnington- Guitar (Master of the Shred)

The Birmingham four piece who have impressively only been gigging live for 10 months, have already gained a reputable stance for their powerful rock n roll infused deliverance. Taking influences from the past 30 years and rebuilding it to something of their own.
Romans offer a journey of crushing destruction. Tearing up the drums for a solid yet consistent belting beat accompanied with a melodic ferocious upheaval.
Romans debut EP “Black Ties” Showcases the band’s sound as captured by Chris Coulter of Stakeout Studios, renowned for work with the likes of Arcane Roots, We Are The Ocean and The Ghost of a Thousand. June 10th will see this new adventure for the band as they release the EP and set for many live dates to coincide with the release.
“A roundhouse kick to the face! DIRTY AS FUCK” – KERRANG! UNSIGNED, ALEX BAKER
The EP itself boasts 5 filthy tracks.
“Something Biblical” immediately pursues the Romans experience by rapidly opening the EP with an underlying feedback sound and offset of belting beats fused with fiery vocals and driven riffs. This track offers that deep sound with an added stop start appeal and a strong captivating phat riff.

“Coffee” then follows with a more melodic composition, lighter than the previous track but still offering that deep sonic texture.
The atmosphere created takes a slower sense as third track titled “Barriers” delievers a more meaningful and intense approach, this said forceful fervent riffs are present throughout pushing above the lucid and consistant beats.

The vocals throughout each of the tracks are balanced between the one pair of lungs offering a harmonious deliverance, tweaked with the second income of vocals offering a more abrasive and straining approach. Together the vocals bounce of one another resulting in a band confident to captivate in both their vocal abilities and their musical liberation.

Overall the EP offers and can pride itself on its sheer crushing effort. Nothing short of feroucious throughout. It’s melodic, tight and catchy offering a lasting listen and providing the band its first solid effort on their behalf.
Black Ties will be released on iTunes and CD via Pornography for Cowards on the 10th June 2011.

We were also very lucky enough to find out about the EP, the recording process and everything within Romans following a chat with the band.

Firstly thanks for taking the time to be a part of Circuit Sweet.
The band all started when Tom (Vocals/guitar) and Ben (guitar) met at University in Birmingham and quickly decided that they would like to work together musically. Russ (bass) was selected for the band as he was the best choice around for the style of music we were playing, and Denny (drums/vocals) had played in a band previously with Russ, so he was approached and slotted into the band behind the kit. To be honest, it was a pretty natural process, and we clicked with each other virtually straight away.
The name came from many evenings spent looking at the bottom of a glass in our local pub; we had a ton of ideas, but nothing that we were completely happy with. We had 2 or 3 songs before we had the name, and just wanted something short enough for people to remember. As soon as ‘Romans’ was mentioned, we all jumped on it.
As a collective, we came together because we enjoyed and wanted to make music, rather than because we all had the same taste, but that variety is probably what gives us the sound we have. As far as we’re concerned, a good song is a good song, whether it’s instrumental, in a dropped tuning, screamed or sung vocals or indeed anything else. Obviously we all have favourite artists, but we try and take something from everything that we listen to and entwine it in something that we hope sounds original.
Aggressive. Powerful. Catchy. Ambitious. Sweaty.
For 30 minutes we get the stage to ourselves, and that’s our chance to show people who we are and what we do best. We’d definitely consider ourselves a live band, first and foremost; it’s something that we all love to do, and it’s apparent in the energy we give off when we play. For that short period of time we’re on stage, we give it our all, and play like we won’t get another chance.

It all came about a bit accidentally really: we sent our first Demo off to Richard (@PFC) for review at the back end of last year, and kept in touch. From then on, we got talking, and once we’d recorded the EP, it snowballed from there. Richard has helped us no end, and without his input, the EP would scarcely exist. He’s helped us with everything from contacts to design to printing, and he’s bloody efficient too, so it’s been good fun to work alongside him. We’d definitely suggest him to anyone looking for assistance with a release.

Yes, this is the first time we’ve released anything properly, and put everything behind it. It’s a small EP, but it’s taken a while to put together, so we’re hopeful that it’ll have the right impact. As a band, we have really tried not to rush into anything at all, so it’s as close to perfect as we could ever wish it to be. 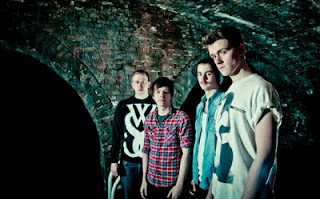 Tom had worked with Chris before, and spoke very highly of the way he did things. After we’d had a look at some songs that were recorded at Stake Out Studios, we knew it would be the right place for us to go. Chris is an outright legend. His patience stretches far beyond that of anyone we have met before or since, and his work ethic is incredible. You don’t finish until the right sound, riff, vocal or beat is there. Even after we left the studio, Chris is still working hard with us, consistently receiving emails about the tracks for little tweaks and touches and advice on what to do next. We can’t speak highly enough of him.
‘Black Ties’ will hopefully show everybody what we are about, and we consider The EP to be the most well rounded release we could have possibly made at this point in the band’s short life. The songs aren’t exactly uplifting, happy numbers, but we’re not trying to push forward any messages or meanings, the songs are just our way of letting go and enjoying ourselves. Some people like to drink or take drugs, jumping around and beating the shit out of our instruments is our release

The E.P was recorded in such a way as to get as close to our live performance as possible, and we spent a long time talking with Chris about things within the E.P being achievable live. There’s nothing worse than going to watch a band live, and the band not being able to re-create what you hear on their record. We added small things in at the studio that we didn’t originally have, so we have spent the time before the E.P’s release working hard on getting those small things together so we can do them live.

It’s hard to pinpoint anything specific, because it’s something that’s new to all of us, so every aspect of it is pretty exciting. The EP launch show looks set to be pretty awesome though, we’ll be playing alongside Sienna and Violet, and making it a proper party at The Flapper in Birmingham on June 10th. The other bands are all Midlands-based, so we’re hopeful that we should be able to take the roof off one of the best venues in Birmingham.
Obviously – like every band – we want our work to be recieved with as much positivity as possible, but we are also very aware you can’t please everybody. Hopefully listeners will hear us and really understand what we are about and embrace us with open arms.

Our goals have probably not changed that much from when we started, and aren’t likely to change much in the near future: we want to play to as many people as possible, regardless of whether they want to listen, and we hope that the EP will bring us to the ears of a few people that might not have heard of us otherwise. We’ve got a slot at this year’s Off The Cuff festival, which is a big thing for us, and from then on, we want to play in any city/ town that will have us, so if you know anyone that fancies putting four idiots on a stage, tell them to get in touch!

You can listen to a few demos of whats shortly to be offered as a little taster via their bandcamp below.

Get closer to the band to follow their EP release journey and the aftermath by becoming a fan HERE.
Pornography for Cowards can also be followed and kept in the loop regarding their release HERE.