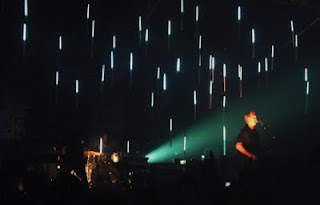 How does such an influential band maintain their legacy and consistently make their live performances the best you’ll see?

In 1998 Queens Of The Stone Age released their Self- Titled debut, and in doing so essentially grounded the “Stoner Rock” genre. 13 years later and continual success the band reissued their first release in May of this year, this time through Homme’s own label, Rekords Rekords. The release included relevant b-sides embedded within the track listing and to coincide with this release the reputable rock band embarked on a worldwide tour to support the album. The band set to play their self titled release as a whole, an effort which is so complete and fully formed, an album they potentially used as a template to work off with all other musical ventures, the sound they’d not only built but emphasized over a decade.

Saturday 21st May after 3 previous dates in the UK, QOTSA had just one more UK stage to fill before taking their presence to Paris and beyond. Manchester Academy bought in dedicated fans local and national. Each maintaining their excitement with spirits soaring despite the journey many had taken to get to the venue; the sold out show had a thriving audience awaiting to see the true living rock legends.

For an iconic band that have not only influenced my life but that of millions of others, when witnessing them live and to review their perfor 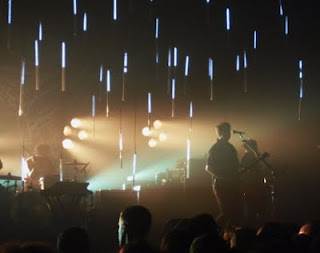 mance in an unbiased, honest account; doubts form as to whether they can truly deliver, leaving an idols gig with disappointment will change your views instantly. And for a performance from such renowned characters of a highly sought after status, doubts of the crowd to artist contact were reluctantly waiting in the shadows. One wrong move from a member of the crowd could have spoilt it for hundreds of others sharing the same moment. The majority of QOTSA fans have seen previous responses to negative actions from the audience, however these underlying doubts quickly disappeared within the first verse of the first track of the night; Regular John.

Opening their set with Regular John, the chords from the beginning gradually building up the tension alongside the chugging guitar sound they call their own, the entire atmosphere simply exploded. With lyrics “Open up your eyes, open up your room, open up your arms” chanted back to the band throughout the track. Monotonous hard hitting riffs present throughout and assisting the full bodied sound that showed no signs of weakness.
Avon abruptly followed, of course the set list is the same as the self titled track list; second track in each member already giving it their all. This track just like the majority from this release proving why its still a classic. Joey Castillo forcefully accommodating his drive, bringing such an aggressive power collating with the hypnotic riffs. The notorious drum solo Avon is distinguished for, is delivered from Castillo with a graceful control yet with power that still remains gripping. The charging rhythm innocently softened by the soothing vocals. 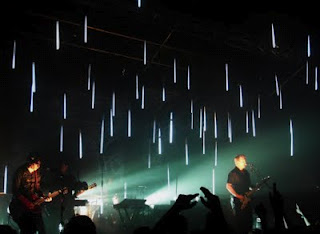 Following this and without a breather, the men carried on to blitz If Only. A melodic track on their behalf offering the audience the lyrics to reconnect. Walking on the sidewalks  and You would know both tamed the set down by offering a slower and mellower composition. Both of which highlighting Mikey Shoes heavy, pulsating and very deep bass tone. Walking on the sidewalks priding itself on the piercing riff, backing drone, and most importantly the phat sounding drum beat.
A small break following How to Handle A Rope and a brief moment to speak to the audience whilst Troy swapped Guitar’s, the band really were powering through their set. When Mexicola ‘s prominent raucous riff fired through, every element played matched up to the pure filth of that riff and undoubtedly it was the heaviest track to embrace the evening. Holding such captivating lyrics such as “it’s a wonder that those guns don’t point at you” the audience all singing in unison. The instrumental piece Hispanic Impressions ensued the setlist with a tight compulsive engagement. Homme and Troy regularly keeping eye contact and smiling, made for an enlightening sentiment during their playing. An added bonus was conveyed to all when The Bronze, an addition to their b-side, was performed.
The end of the set soon drew to a close with the penultimate track I was  a teenage hand model a more memorable effort; filled with gentle beats, shakes, fruity keys/chords an array of tweaks, feedback and samples all toned down with the lulling vocals Homme perceives. One of the most enchanting tracks of the set. You Can’t Quit Me Baby  drew the self titled album set list to a close, but not without a ferocious abolishment. The brutally barbaric riff that embraces the entire track sounded phenomenal, gritty but lustful. As the track came to an end, the thundering beat took an intense tempo increase, as Castillo played hard, the riffs then joined into an impetuous crashing finale, which saw the band up and leave the stage, their self titled album performed in its entirety, with a clear professionalism displayed in the structure and tightness the band portrayed. 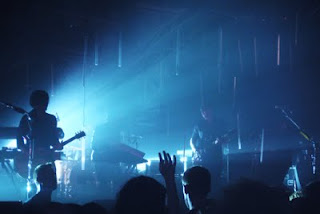 The crowd, simply left in amazement. As the cheers and appreciation continued, the shortest wait was soon over as the band came back to their moment for a two set encore.
It was incredibly refreshing to see each and every one of QOTSA wanting to be where they were. They wanted to be performing they wanted their audience to be having a great time. In fact they wanted to give more to the crowd as they regularly stated. With the audience roaring “We want more” their request was answered, Homme replied “You want more? Good! We want more too!“. They thrived from the feedback and energy each person in the room held.

Previous live UK dates leading up to this one, it was reported that Queens took requests for their encore, and many of the crowd were lead to believe the same. However this wasn’t the case, instead a double encore was ensued.
The first encore following their return, began with The Sky Is Fallin’  taken from their 2002 album Songs For The Deaf. A dark atmospheric return coinciding a dark track, with a consistent underlying drone aided with a series of stop start fast pelting riffs and shattering cymbal smashes. Joey adding fills that previously hadn’t existed. Constantly bulking the deep sound they all collectively deliver.
Do it again followed much to the audience s 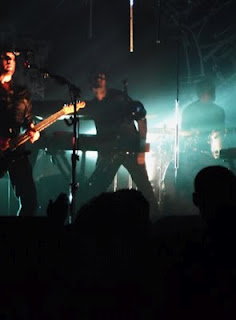 urprise but it was Feel good hit of the summer which sparked off a fury, the opening track from their second album Rated R. Consisting of melodic memorable hooks, repeated lyrics and a striving build up of riffs fusing another track with a large scaled wall of sound. Controlled feedback until the known riffbitchin shred kicks in. Sick Sick Sick finished the first encore. The Grammy nominated single taken from their 2007 album Era Vulgaris ; the most abrasive hard-hitting and thrash track to be played yet, again highlighting the raw power the band maintain.
Once again the band left the stage, but they know for a fact they have every single person in the academy captivated and needing more, that’s their talent. They know they can deliver and they delivered a practically flawless, near perfect if not perfect set. But they returned for their final encore. A song Homme dedicated to all the beautiful ladies surrounding him, queens kicked into Make it wit chu, an incredibly passionate performance on their behalf, emotion was resonating the track throughout. Little Sister  then followed and provided anthem like recognition as noise levels intensified the track itself  completely ripped apart the evening, engaging and winsome with an irresistible warmth and compelling distorted riff leading the track and indeed the night to an astonishing finale. Leaving a bittersweet taste for more.

An interview with Zane Lowe the night before, Homme stated “He’s sick of doing the first record, we’ve never played the same set list before” That being said, they passionately pulled it off and charmed every single person present. With the news of a new album in the pipeline Homme also said “We’re at a weird moment where we really don’t feel like we have anything to prove. We just want to play to the people that are into us and we want to play right at them”.
And that they did. Their set in its entirety truly was flawless, they really don’t have anything to prove, anybody that has witnessed their live performance will be aware that its so full, deep, vibrant and spot on. They did it for the people that are into them and they pleased them. They’ve earned their legacy. Their genre, attitude, riffs, fills, samples, beats have influenced so many and many seeing them live can walk away with new aspirations of their own. 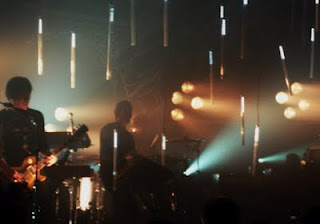 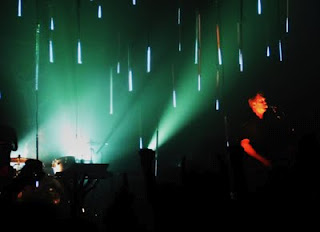 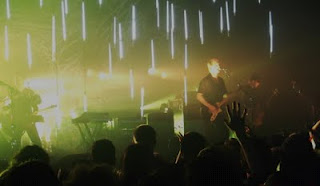 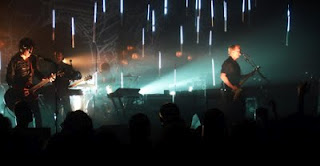 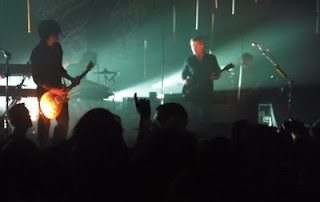 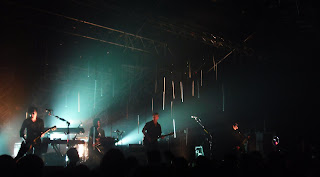 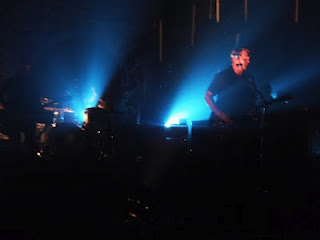 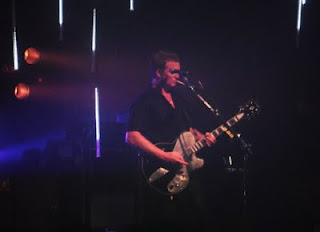 Half of Circuit Sweet was also lucky enough to meet the band, a total honour.